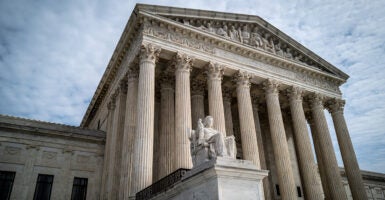 The Supreme Court could soon find in favor of the right of religious employers to refuse to hire individuals who do not share their religious beliefs. Pictured: The front portico of the U.S. Supreme Court in Washington, D.C. (Photo: Getty Images)

On Monday, the Supreme Court declined to hear the case of a religious organization claiming it had the right to refuse to hire individuals who did not share its religious beliefs. In denying the case on technical grounds, Justice Samuel Alito indicated that if it or a similar case came before the court in the future, the justices could likely find in favor of such a right for religious employers.

The case of Seattle’s Union Gospel Mission v. Matthew Woods centers on an employment discrimination claim against a religious nonprofit in Washington state under Washington’s law against discrimination. The mission argued it was exempt from the law because of the law’s express exemption excluding “any religious or sectarian organization not organized for private profit” from its employer definitions.

The mission’s challenge to the claim arises under the free exercise of religion clause of the First Amendment. Nearly 100 years old, the mission cares for more than 1,000 homeless individuals in Washington state every day. The ministry’s religious convictions and evangelization are the foundation of everything it does. To succeed in its charitable work, the mission requires staff members to share its religious beliefs, including those on same-sex relationships.

In 2016, Matthew Woods applied for a paid position in the mission’s legal aid clinic. During the application process, Woods disclosed that he was bisexual and in a same-sex relationship. He asked if that would be an impediment to his being hired for the job. The clinic director told him that it would and instead referred him to a secular legal aid clinic’s job posting.

To “protest” the mission’s employment policy, Woods applied anyway. The clinic’s director again met with him, explaining that Woods was not active in a local church and, therefore, could not provide the required pastoral reference. Nor did he share the mission’s religious faith and desire to help clients develop a personal relationship with Jesus. The mission later hired a coreligionist for the position who shared its beliefs.

Because the Washington Supreme Court expressly refused to apply its state employment law exemption for religious organizations in the case, Woods’ discrimination claim was allowed to proceed, with the state court claiming that to do otherwise could create a “license to discriminate.”

Alito, joined by Justice Clarence Thomas, concurred in the Supreme Court’s denial to review the case because the lower court proceedings are not yet final. But Alito noted that the state Supreme Court had set up what might be an “inevitable” confrontation on whether the right of religious employers to hire coreligionists for any position is constitutionally required.

In 2012, in Hosanna-Tabor Evangelical Lutheran Church and School v. EEOC, the U.S. Supreme Court recognized a “ministerial exception” to employment disputes, noting that the ability of religious organizations to hire those they see fit for important positions stems from the First Amendment, which gives “special solicitude to the rights of religious organizations” to operate according to their faith without government interference. The court declined, however, to adopt a rigid formula for deciding when an employee qualifies as a minister and so meets the exception.

The court then reaffirmed the ministerial exception in Our Lady of Guadalupe School v. Morrissey-Berru in 2020. It noted that to let religious organizations operate in accordance with their faith, the First Amendment requires courts to “stay out of employment disputes involving those holding certain important positions with churches and other religious institutions.”

In his opinion denying the review of the gospel mission case, Alito wrote that because of federal exemptions for religious organizations and similar state employment laws, the Supreme Court had not yet had occasion to determine whether the Constitution itself also requires religious organizations have the freedom to hire whom they please.

But he went on to say that “the day may soon come when we must decide whether the autonomy guaranteed by the First Amendment protects religious organizations’ freedom to hire co-religionists without state or judicial interference.”

The Washington Supreme Court had concluded that a material question of fact remained concerning “whether the [mission] staff attorneys qualify as ministers” and sent the case back to the trial court to allow it to answer the question.

He went on to add, “If States could compel religious organizations to hire employees who fundamentally disagree with them, many religious non-profits would be extinguished from participation in public life—perhaps by those who disagree with their theological views most vigorously.”

While there has been no final state judgment yet on the remaining factual issue (making the Supreme Court’s review inappropriate), Alito concluded his opinion with a nod toward possible future review of the case:

Therefore, there is a possibility, if not a likelihood, that the court may decide to take up this case, or one like it, at a future date and decide this important religious liberty question once and for all.