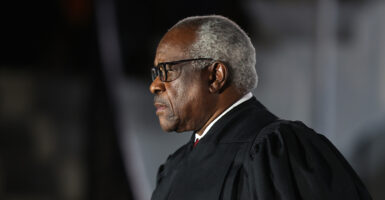 Supreme Court watchers learn a lot about the justices’ thinking on particular issues based on which cases they agree to accept.

Court watchers can also learn a lot based on which cases the justices reject—especially when some of the justices take the relatively rare step of issuing a statement “respecting the denial of certiorari,” which is their refusal to take a case.

That’s what happened on Monday when Justice Samuel Alito, joined by Justices Clarence Thomas, Brett Kavanaugh, and Amy Coney Barrett, issued such a statement in an important religious liberty case where the parties are arguing over the contours of the court’s “ministerial exception” in employment cases.

The ministerial exception ensures that religious institutions can faithfully fulfill their religious missions as they see fit, largely free from government interference.

As Alito explained, citing two of the court’s recent decisions where the ministerial exception applies, the “Religion Clauses of the First Amendment sometimes forbid ‘courts to intervene in employment disputes involving teachers at religious schools who are entrusted with the responsibility of instructing their students in the faith.’”

Gordon College, a Christian liberal arts college in Massachusetts, argues that the ministerial exception should apply to bar a lawsuit by one of its professors, Margaret DeWeese-Boyd, who the college decided not to promote.

Massachusetts’ highest state court said that the ministerial exception did not apply, and that DeWeese-Boyd’s lawsuit could proceed, because she did not perform ministerial functions such as leading religious services or teaching exclusively religious classes.

Still, as that court recognized, the college expected her to “integrate her Christian faith into [all aspects of] her teaching and scholarship.”

Alito said the reasoning behind Massachusetts’ highest court’s decision “reflects a troubling and narrow view of religious education.” He explained that “many faiths conceive of … ‘religious education’ [as including] much more than instruction in explicitly religious doctrine or theology.”

At many religious schools, even nominally secular subjects are taught through a religious lens.

Alito said that for “those reasons, I have doubts about the state court’s understanding of religious education and, accordingly, its application of the ministerial exception.”

Still, he and the other three justices who joined him concurred in denying hearing the case on the understanding that “[i]f DeWeese-Boyd prevails in the trial court, there is nothing that would preclude Gordon [College] from appealing at that time, including seeking review in this Court when the decision is actually final.”

That’s a pretty clear invitation and an important one because under the court’s “Rule of Four,” only four justices have to agree to hear a case in order for the court to take it up.

It doesn’t take a math whiz to recognize that four justices signed onto this statement “respecting the denial of certiorari” that includes this invitation.