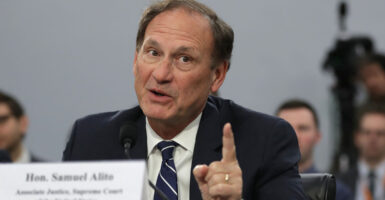 Supreme Court Justice Samuel Alito prompts a virtual torch and pitchfork brigade by asserting that unpopular beliefs and speech must be protected by the Constitution and all freedom-loving Americans. Pictured: Alito testifies about the court's budget before a House Appropriations subcommittee March 7, 2019. (Photo: Chip Somodevilla/Getty Images) 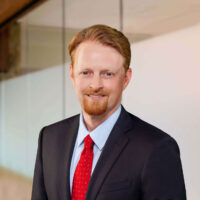 The fact that Supreme Court Justice Samuel Alito gave the keynote address to the Federalist Society in and of itself should be neither surprising nor controversial.

Since the theme of the conservative legal group’s 2020 National Lawyers Convention was “The Rule of Law and the Current Crisis,” the content of Alito’s remarks on emerging legal trends during the pandemic likewise should not have raised any eyebrows. But alas, it is 2020.

Almost before Alito finished his remarks Nov. 12, a stampede began for a spot in line for the national fainting couch, also known as Twitter.

There, reaction ranged from “right-wing, nakedly partisan” to “making the best argument for court reform,” along with the usual “f— off” and “f— you” one has come to expect from the intellectual and semantic sewer dwellers who justify their keyboard crusade against any idea they disapprove of under the guise of their self-appointed status as zealous defenders of tolerance.

So, what was it that Alito said that prompted the virtual torch and pitchfork brigade? To summarize: Unpopular beliefs and speech must be protected by the Constitution and all freedom-loving Americans.

He warned that the religious liberty and freedom of speech enshrined in the First Amendment to the Constitution are viewed so unfavorably by some as to relegate them to second tier status.

Worshipers at the shrine of the perpetually offended were particularly aghast that to illustrate his point, Alito brought up recent Supreme Court cases involving the Little Sisters of the Poor, Masterpiece Cakeshop, and Ralph’s Thriftway pharmacy.

All three cases involve people of faith whose viewpoints on the issues of contraception, marriage, and abortion are not outside the doctrinal mainstream of Catholic or Protestant religious teaching, but are at odds with cultural orthodoxy.

In each case, the person or people holding the culturally unpopular opinion were persecuted by the very government that should have protected them.

But Alito’s remarks surprised no one who had read his opinions in recent years. Over and over, he has raised concerns over the weakening of the First Amendment’s protection.

In his dissent from the high court’s majority opinion in Obergefell v. Hodges, which legalized same-sex marriage, he warned the decision would be used “to vilify Americans who are unwilling to assent to the new orthodoxy.”

In the course of its opinion, the majority compares traditional marriage laws to laws that denied equal treatment for African Americans and women. The implications of this analogy will be exploited by those who are determined to stamp out every vestige of dissent.

Alito continued by noting the two sentences of Justice Anthony Kennedy’s majority opinion devoted to the rights of those who would disagree:

Perhaps recognizing how its reasoning may be used, the majority attempts, toward the end of its opinion, to reassure those who oppose same-sex marriage that their rights of conscience will be protected. We will soon see whether this proves to be true. I assume that those who cling to old beliefs will be able to whisper their thoughts in the recesses of their homes, but if they repeat those views in public, they will risk being labeled as bigots and treated as such by governments, employers, and schools.

Alito concluded his address to the Federalist Society with a reminder that the Supreme Court justices should not be the only nine people protecting our most cherished and fundamental liberty—the ability to speak, believe, and live according to our own conscience. Safeguarding this bedrock principle of our republic is the duty of all freedom-loving Americans.

Court dockets around the country are replete with cases that prove Alito was right when he predicted the inevitable consequences for religious liberty of the Obergefell decision. The reaction to his remarks at the Federalist Society proves him right again.

Standing up for unpopular opinions is unsurprisingly unpopular. It’s an object lesson in the dangers of myopic, self-obsessed, and tragically shortsighted view of liberty.

Protecting the rights of those in the minority should be a nonpartisan issue. If for no other reason, 2020 has shown us that you never really know when you’ll be the one in the minority.