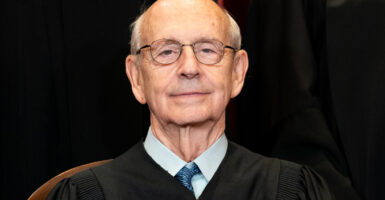 Cordial and reserved, Justice Stephen Breyer, pictured April 23, has been a low-key presence on the nine-member Supreme Court, where along with Justices Elena Kagan and Sonia Sotomayor he is a member of the so-called liberal bloc. (Photo: Erin Schaff/Pool/Getty Images)

Although he did not heed the myriad calls for him to step down by liberal groups at the end of last term, Justice Stephen G. Breyer, 83, reportedly will retire from the U.S. Supreme Court at the end of this term, leaving a vacancy for President Joe Biden to fill as Democrats maintain a slim majority in the Senate.

Breyer, of course, would remain an active member of the high court until the end of the term, participating in all its cases, including those involving abortion, the Second Amendment, and the constitutionality of racial preferences in university admissions.

The calls for Breyer’s resignation were anything but subtle; in the press and on every form of social media, liberal pundits began demanding that he do so as soon as Biden took his oath of office.

In April, the group Demand Justice sent a billboard truck to drive around the Supreme Court building with a sign saying, “BREYER, RETIRE: It’s time for a Black woman Supreme Court justice.”

Biden has stated publicly that his first Supreme Court appointment would be a black woman, leading to inevitable speculation as to who that would be.

Breyer has been a low-key presence on the nine-member court, where along with Justices Elena Kagan and Sonia Sotomayor he is a member of the so-called liberal bloc. He does not have the charismatic flair of the late Justice Antonin Scalia, nor does he share the public adulation accorded his fellow Clinton appointee, the late Justice Ruth Bader Ginsburg, even though he and Ginsburg often agreed on the issues.

Breyer is, by all accounts, a gentleman and a scholar: quiet, cordial, and reserved—except during oral arguments, where his penchant for posing long, odd hypothetical questions frequently set Supreme Court advocates off balance.

Born in 1938, Breyer grew up in San Francisco, a child of upper-middle-class parents. His father spent most of his career as legal counsel for the San Francisco Board of Education. His mother was an ardent Democrat who worked for various political causes, including the League of Women Voters.

Breyer received his undergraduate degree in philosophy from Stanford University in 1959, then attended Oxford University as a Marshall Scholar. Upon returning to the United States, he earned his law degree from Harvard Law School, graduating in 1964.

Following a Supreme Court clerkship with Justice Arthur Goldberg, Breyer worked at the Justice Department as a special assistant to the head of the Antitrust Division. In 1967, he began teaching at Harvard Law, which he has continued to do in various capacities ever since. His wife, Joanna, the daughter of a British viscount, is a psychologist.

Breyer also served on the Watergate Special Prosecution Force and as counsel to the Senate Judiciary Committee during Jimmy Carter’s presidency. Carter appointed Breyer to the 1st U.S. Circuit Court of Appeals in 1980.

In 1993, after Justice Byron White retired, Breyer interviewed for that vacancy.  An avid cyclist, Breyer had been hit by a car while crossing Harvard Square a few days beforehand and was hospitalized with a punctured lung and fractured ribs.

Still in a significant amount of pain, Breyer traveled to Washington for the interview with President Bill Clinton. Although the nod for that vacancy ultimately went to Ginsburg the following year, Clinton went on to nominate Breyer to succeed retiring Justice Harry Blackmun. He was confirmed easily by a Senate vote of 87-9.

Breyer often describes his own judicial philosophy as pragmatic, preferring, as he recently put it, “a functional approach, which considers purposes and consequences” rather than a “highly detailed judicial-rules-based approach.”

Reflecting this approach, his opinions almost invariably reject bright-line rules and express concern about the impact of legal decisions on the people who must abide by them, rather than downplaying or ignoring the consequences in favor of “language, history, tradition, and precedent.”

At his 1994 confirmation hearing, Breyer explained:

I always think law requires both a heart and a head. If you do not have a heart, it becomes a sterile set of rules, removed from human problems, and it will not help. If you do not have a head, there is the risk that in trying to decide a particular person’s problem in a case that may look fine for that person, you cause trouble for a lot of other people, making their lives yet worse.

A reliable vote with the liberal wing of the court—especially on issues such as same-sex marriage, abortion, and campaign finance issues, but more of a centrist on criminal justice issues—Breyer values consensus and compromise, and has referred to dissents by justices as a “failure.” Breyer is also an unapologetic “living constitutionalist.”

As he explained, speaking of the Constitution:

In this document there are values that do not change … the values are permanent. But how they apply, that’s a different matter because life changes. So we have to apply permanent values to changing circumstances. That keeps this Constitution protected and meaningful for people who are alive today.

On that subject, Breyer willingly engaged in some memorable public debates with Scalia, a staunch originalist. During one such debate, Breyer said:

Most judges, appellate judges in particular, when they face a difficult question of statutory or constitutional interpretation, … normally start with six tools. They have the text, they can look to the history—how do those words get there, they can look to the tradition—how those words have come to be used before and after, precedent, the purpose of the statute—the statutory phrase in question, and the consequences. … I think we all have those six tools, … but I think some of us emphasize the first four and try to avoid the last two. And they think that in doing that, it’s less likely that you’ll get subjective. I don’t think that. I think you have to emphasize in many of these cases the last two, purpose and consequence, and I think there are ways of doing that which are honest … And I think that is just as likely to be objective as to rely solely on the first four. … I think emphasizing the latter is more likely to keep the judge in touch with the legislature in a statutory case, which is in turn in touch with the people, and that is an appropriate thing in a democracy.

Suffice it to say, Scalia disagreed with Breyer, arguing that the problem with this purpose-and-consequence approach is that it “invite[s] subjective judgment.”

Although Breyer’s opinions lack the wit and sheer literary brilliance of Scalia’s or Kagan’s, he has written several significant decisions during his tenure on the court.

Last term, Breyer wrote the majority opinion in Mahanoy Area School District v. B.L., upholding the First Amendment rights of a disgruntled student who was punished by her school after expressing her displeasure, in a vulgar fashion, in an off-campus Snapchat posting about her not having been selected for the varsity cheerleading squad.

And Breyer has been passionate in his dogged opposition to the death penalty, as perhaps best exemplified by his lengthy dissent in Glossip v. Gross in which he expressed his view—repeated many times since then—that it is “highly likely” that the death penalty is unconstitutional.

For the past several years, and very much to his credit, Breyer has decried the increasing politicization of the Supreme Court, not by its members but by the media and the politicians who publicly ply the notion that a justice always will vote the way the president who appointed him or her would expect.

“A president who thinks the judge is always going to decide his way is really under some cloud of delusion,” Breyer said during a discussion at the Nexus Institute last October.

He often cited President Theodore Roosevelt’s appointment of Justice Oliver Wendell Holmes, whom the president assumed would back his attempts at trust-busting. Holmes’ rulings against the president’s position made Roosevelt furious. There are, of course, many instances of this phenomenon.

In a speech at Harvard Law School last year, previewing themes he would explore in his new book “The Authority of the Court and the Peril of Politics,” Breyer said:

The Senate confirmation process has changed over the past two decades. It has become more partisan. Senators more often divide along party lines, and often describe a nominee as too liberal or too conservative. And what they say to the press, and to their constituents, reinforces the view that politics, not legal merit, drives Supreme Court decisions. I think, or fear, these are more than straws in the wind. They will reinforce in minds that the Supreme Court justices are primarily political officials or junior league politicians, rather than jurists. They can believe that the differences among judges reflect not politics, but jurisprudential differences, but that is not what the public thinks. At least not most of them.

He added: “If the public sees judges as ‘politicians in robes,’ its confidence in the courts, and in the rule of law itself, can only diminish, diminishing the Court’s power, including its power to act as a ‘check’ on other branches” of government.

It seems that many who have been urging—begging, really—Breyer to retire do not share these sentiments, but we can only hope that the public retains confidence in the independence of the judiciary.

Breyer has not stepped down yet. As this article should make clear, I disagree with many of his views on legal issues. However, courteousness and decorum being in distressingly short supply these days, I would like to thank Justice Stephen Breyer for his years of public service and wish him well in his retirement.