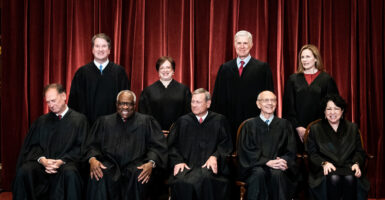 The report from the Presidential Commission on the Supreme Court states that it “does not take a position” on any proposal or “purport to resolve any of [the] differences” among commission members. Pictured: Members of the Supreme Court prepare to pose for a group photo April 23 in Washington. (Photo: Erin Schaff/Pool/Getty Images)

Most of us know the old philosophical chestnut: If a tree falls in the woods but no one is around to hear it, does it actually make a sound?

The Presidential Commission on the Supreme Court’s release Monday of its draft final report offers this variation: If the president creates a commission but it doesn’t take a position on anything, does it actually accomplish something?

President Joe Biden announced last October, days before the presidential election, that he would appoint a commission to examine ways of reforming the federal courts.

Left-wing groups had been pushing Biden to endorse a scheme for “packing” the Supreme Court: Congress would expand its size from nine justices so Biden could quickly appoint justices who would take the high court in a different direction on certain key issues.

Biden, however, had opposed court packing as a U.S. senator and on the presidential campaign trail.

Biden created the Presidential Commission on the Supreme Court by executive order in April and gave it six months to provide “an analysis of the principal arguments in the contemporary public debate for and against Supreme Court reform.”

This was an unusual assignment for a presidential commission. As a Heritage Foundation report documented in July, presidents who created commissions on a host of issues, including court reform, identified a concrete problem and asked the panel to offer recommendations.

Biden’s Supreme Court commission is the exception: Biden identified no problem to solve and, the report acknowledges, his order “does not call for the commission to issue recommendations.”

Instead, the commission’s report states that it “does not take a position” on any proposal or “purport to resolve any of [the] differences” on those proposals among commission members.

Nor did it “seek to evaluate or judge the weight” of arguments regarding court packing, “and the commission takes no position on the wisdom of [Supreme Court] expansion.”

Instead, the report provides “a critical appraisal of arguments in the reform debate,” describing “arguments … for and against” various reform ideas.

With this kind of mandate, and with nearly three dozen law professors as members, the commission might have approached this as an academic exercise and published the result of its own study.

The commission, however, held six public meetings and invited dozens of witnesses to offer their views. John Malcolm, my colleague as director of the Meese Center for Legal and Judicial Studies at The Heritage Foundation, was one of them. (His testimony is available here.)

The commission’s report does offer a few conclusions that are worth noting.

First, “most proposals would require significant change to our federal judicial system and offer uncertain practical benefits” and some might present “serious constitutional questions.”

Second, the report acknowledges that attempts to appoint Supreme Court justices “with certain views” have resulted in “those very appointees decid[ing] cases in ways that diverged from the preferences or platforms of the appointing party.” This is an important point, because court packing advocates assume that individual justices reliably will decide cases on certain issues in certain ways.

The report discusses the idea of Supreme Court justices and lower court judges switching places for periods of time, which would change the Supreme Court’s membership without changing its size. The report correctly notes that this idea “may present more serious constitutional questions than basic court expansion,” a conclusion I wrote about in 2019.

The report also fails to include a few important points. In the chapter on court packing, for example, the report compares the size of the U.S. Supreme Court with “constitutional courts” in other countries that have up to twice as many members.

Without further explanation of the legal and judicial systems in those countries, that comparison has little value. The report might have included the fact that, in this country, all but seven states have fewer than nine members on their highest court and 17 states have only five.

Similarly, the report also observes that the United States “is the only major constitutional democracy in the world that has neither a retirement age nor a fixed term for its high court Justices.”

The report does not, however, offer any reason why this is a valid comparison. Nor does it explain why the Constitution protects judicial independence by effectively giving federal judges life tenure in the first place. The discussion of ideas for changing the current judicial system would benefit from a firmer understanding of that system.

In the end, the Presidential Commission on the Supreme Court did what Biden wanted. It described, reviewed, presented, and summarized. The report is full of “opponents say this” and “supporters say that.”

This unusual approach was certainly by design, a way to say something about court reform in general without committing to anything—and in the process, weakening further the case for court packing.