The Consequences of Victimhood-Based Education Are Deadly 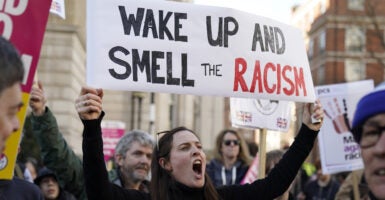 Critical race theory is an ideology that prizes victimhood and defeating the “settler-colonial” enterprise. It does this in peaceful or nonlethal ways, at times, but lately, and with growing frequency, by lethal means. (Photo: Andrew Matthews/PA Images/Getty Images)

Daniel Vaynshteyn is a member of the Young Leaders Program at The Heritage Foundation.

Last month’s attempted assassination of a Jewish politician in Louisville, Kentucky, by a Black Lives Matter activist has gone largely unreported by the press. The incident and the general reaction to it speaks volumes about the relationship between the U.S. and Israel.

The shooter, Quintez Brown, was open about his views. In an op-ed, he argued, preposterously, that the ideas and actions of white men are the sole cause of racial disparities in U.S. society, and that we should simply assume that white men are racists.

Brown’s op-ed also highlights a simple truth: It sheds a powerful spotlight on critical race theory and the role it plays as the central ideology among many “anti-racist” activists today, including the leadership of Black Lives Matter.

Critical race theory is an ideology that prizes victimhood and defeating the “settler-colonial” enterprise. It does this in peaceful or nonlethal ways, at times, but lately, and with growing frequency, by lethal means.

Where else have we seen education warped to promote a similar “defeat the settlers” narrative? In schools managed by the Palestinian Authority.

The ideology that both BLM and the Palestinian Authority follow places a higher premium on narrative than over objective truth, or as progressive Rep. Alexandria Ocasio-Cortez, D-N.Y., has been quoted as saying, “It is more important to be morally right than factually right.”

This narrative typically constructs itself around a simple dichotomy of oppressors and oppressed instead of being grounded in historical facts. This results in both BLM and the Palestinian Authority’s education system pushing a narrative that grossly exaggerates, or outright fabricates, entire blotches of history.

The goal of this historical revisionism is simple: to indoctrinate young students in the belief that historical injustices are entirely the fault of and scheme of a singular oppressive class, whether they be the Founding Fathers of the U.S. or Israelis.

In critical race theory, specifically the 1619 Project, this revision creates an evil America whose foundation is predicated on the false idea that the American Revolution was a means to entrench slavery for the wealthy, white landowners.

This historical revisionism manifests itself in the educational system within the Palestinian territories. This educational model has contributed to decades of violence between the two opposing groups.

Examples of this rhetoric is present in a ninth-grade textbook praising martyrdom, utilizing a page out of the Quran instructing those to kill or imprison nonbelievers. Further inflammatory rhetoric is displayed in a first-grade textbook asking students to identify various cities in Palestine. The cities in question, Beersheba, Safad, and Haifa, are in Israel proper and nowhere near any disputed territories, thereby, completely wiping Israel off the map.

A report from the United States Government Accountability Office found that Schools in the PA run by the United Nations Relief and Works Agency for Palestine Refugees in the Near East, the U.N. agency that supports Palestinian refugees, often teaches divisive rhetoric targeting Israelis and Jews. Upon learning this information, the United States Congress introduced legislation to combat the rise of this rhetoric in Palestinian textbooks and received bipartisan support.

To quote Rep. Brad Sherman, D-Calif., who recently reintroduced the Peace and Tolerance in Palestinian Education Act, which is a response to the recently declassified Government Accountability Office report:

As a result of the GAO’s findings, it is necessary for Congress to request additional reports from the State Department to ensure U.S. taxpayer dollars promote dignity and tolerance, and that the educational materials such schools employ do not incite hatred.

Yet, when in American classrooms, similar rhetoric is utilized under the guise of critical race theory to teach children their innate victim or victimizer status, it becomes a partisan and culture war issue.

Critical race theory has been successful in cloaking its rhetoric and ideology in a veneer of academic, professional language, whereas the textbooks used in the Palestinian territories are much more blatant. Both are preaching the same message: to dismantle the “settler colonial system” through any means necessary.

Through the Israeli-Palestinian conflict, we have observed the effect an education system that teaches victimization does to a population, namely, acts of terror directed toward those they learned were their oppressors. If we want to have an America that provides education that inspires and not depresses, we must discard critical race theory.

The targeting of this mayoral candidate is the most recent, but not last, attack against the fictional oppressor of whiteness so long as critical race theory is being promoted.