What Happened When Jackson Went Easy on This Sex Offender 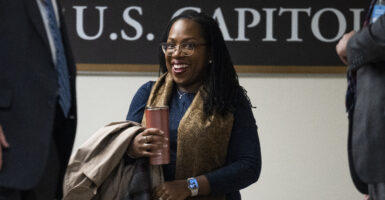 Saying “the conviction alone is devastating," Judge Ketanji Brown Jackson sentenced a man to under five years in 2016 after he sought sexual gratification with a 9-year-old girl. Pictured: Jackson, President Biden's Supreme Court nominee, at the U.S. Capitol in between meetings with senators Wednesday. (Photo: Tom Williams/CQ-Roll Call Inc./Getty Images)

Editor’s note: This article has been corrected to reflect that Dixie Bennett, not Ketanji Brown Jackson, wrote the presentence mitigation report quoted.

In text messages, Neil Stewart talked explicitly about his interest in sex involving minors while setting up what he thought was a meeting at the National Zoo with a man and his 9-year-old daughter, according to a prosecutor’s memo.

“What a bday gift that would be,” Stewart said, referring to the meeting happening on his 31st birthday in October 2015, if the 9-year-old girl “would like to play.”

In February 2017, U.S. District Judge Ketanji Brown Jackson sentenced Stewart to 57 months in prison, or just under five years, after his conviction for possessing and distributing child pornography.

That punishment, far less than the 97 to 121 months prescribed by federal sentencing guidelines, is likely to come up Monday during Jackson’s Senate confirmation hearing on her appointment to the Supreme Court.

In another text, Stewart “provided advice” on how to begin convincing a child to have sexual intercourse, which then could be captured on video.

“The trick,” he wrote, “is starting with really small toys and gradually moving up until something is the same size. And vibration.”

Prosecutors quoted obscene and graphic language in Stewart’s texts for Jackson’s consideration in sentencing that can’t be repeated in a family publication.

In her presentence mitigation report on the case, Dixie Bennett, a forensic mitigation consultant, wrote that “the conviction alone is devastating to Mr. Stewart,” later adding that his “risk of recidivism is exceedingly low.”

But on Jan. 5, 2020, the St. Mary’s County Sheriff’s Office in Maryland arrested Stewart, then 35, on four counts of possessing a controlled dangerous substance other than marijuana, as well as drug paraphernalia.

Stewart’s case is one of seven sex offender cases highlighted by Senate Judiciary Committee member Josh Hawley, R-Mo., in the days leading up to the confirmation hearing for Jackson, 51, President Joe Biden’s nominee to the Supreme Court.

Since June, Jackson, the mother of two daughters, has been a judge on the D.C. Circuit Court of Appeals. From 2013 to 2021, she was a judge on the U.S. District Court for the District of Columbia.

Anticipating meeting the 9-year-old at the National Zoo on his birthday, he wrote: “That’s so hot, god I hope this is real.”

Stewart didn’t know he actually was communicating with an undercover D.C. police detective.

The FBI was able to track Stewart’s email addresses and gained a search warrant, with which investigators found more than 600 images and videos of child pornography on various electronic devices.

In December 2015, the FBI arrested Stewart. He pleaded guilty in June 2016. Jackson was assigned the case May 31. Sentencing was set for October.

Neither side got what it wanted, but Jackson veered closer to the public defender’s request. The decision seemed consistent with a Harvard Law Review article Jackson wrote in 1996 and her comments as a member of the U.S. Sentencing Commission, when she suggested that laws are unfair to sex offenders.

Jackson sentenced Stewart to 57 months on Feb. 21, 2017, with credit for time served. This would be followed by 120 months, or 10 years, of supervised release.

“Mr. Stewart’s personal story of artistic achievement in the areas of the visual arts to include sculptures, sketching and painting has been inspirational and aspirational, especially to all those he has mentored, who, like him, began life’s journey under different circumstances,” Bennett wrote, adding:

Mr. Stewart has completed and sold over 200 commissioned art pieces. He hopes that his acknowledgment of wrongdoing, his full acceptance of responsibility, and his attempted assistance and full cooperation with federal authorities will allow him to begin the process of correcting his errors. …

Mr. Stewart has not assaulted or harmed any other person, before, during or after the offense conduct.

Jackson previously wrote while serving as vice chairwoman of the U.S. Sentencing Commission. The judge said then that in the past, she “mistakingly assumed that child pornography offenders are pedophiles” and she wanted “to understand this category of nonpedophiles who obtain child pornography.”

Jackson’s Harvard Law Review article, in which she argued against public sex offender registries, is titled “Prevention Versus Punishment: Toward a Principled Distinction in the Restraint on Released Sex Offenders.”

In it, Jackson contended: “Community notification subjects ex-convicts to stigmatization and ostracism, and puts them at the mercy of a public that is outraged by sex crimes.”