Goodwill From Iran at Year’s End? Not a Chance 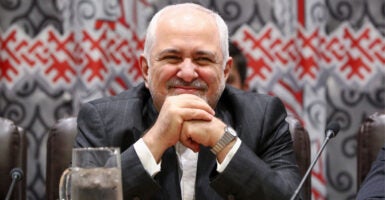 Iran is expanding its budget for nuclear research, which likely means expanded research for nuclear weapons. Before the next administration considers engaging diplomatically with Iran again, it should take a look at the nation’s actions. Pictured: Iran's Foreign Minister Mohammad Javad Zarif. (Photo: Alexander Shcherbak/TASS via Getty Images)

There’s more trouble coming from Iran—not that we should be surprised.

This week, the Iranian defense minister announced that the country’s already worrisome nuclear research program would be nearly tripling—yes, tripling—its annual budget with a 256% increase.

I wonder what the Organization of Defensive Innovation and Research, which was once headed by the infamous nuclear scientist Mohsen Fakhrizadeh—who was killed in Iran last month—will use that big bump in funding for?

Specifically, it can be expected that the funding bump-up will go to:

Come to think of it, considering how Tehran has failed to come clean about its nuclear history and other more recent suspicious activities, who knows how else the influx of money to the ministry of defense’s nuclear program could be used?

Then again, this news comes on top of Iranian President Hassan Rouhani declaring earlier this week that Iran’s missile program wasn’t up for negotiation—just as it hadn’t been when the Obama-era nuclear deal was concluded.

Iran has the biggest and arguably most active missile program in the Middle East. Many believe its ballistic missile arsenal isn’t only to advance Iran’s goal of regional hegemony, but it’s also closely linked to Tehran’s nuclear (weapon) aspirations.

Among other flaws in the nuclear deal, such as “sunset provisions,” the absence of limits on Iran’s nuclear-capable missile programs are a threat to regional security and the U.S. homeland, should Iran develop an intercontinental ballistic missile capability.

Of course, Iran is posturing with its flouting of the nuclear deal and other provocative public pronouncements. In doing so, it hopes to force the U.S. back into the nuclear deal, which it feels was advantageous to its interests—and understandably so, considering its shortcomings.

Not to mention the regime’s desire to escape the Trump administration’s “maximum pressure” campaign, which cost Iran hundreds of billions of dollars that could have been used for the nuclear and missile program or other bad behavior.

But the next administration, which has indicated that it might be willing to return to the nuclear deal, needs to pause and take a good hard look at Iranian actions over the last four years before it even thinks about engaging Iran diplomatically.

From Iran’s aggressive activities in Syria and Yemen to its support of terrorism and violent attacks in the Persian Gulf, Iran has been and still is a threat to peace, security, and stability and should be treated like one.

To the idea of Iran changing its reckless ways in 2021? I say not a chance.