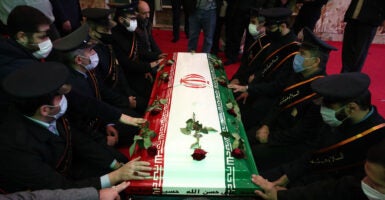 There’s plenty of debate about the daring killing last week of the infamous Iranian nuclear scientist Mohsen Fakhrizadeh, who some consider to be a leading figure in Iran’s nuclear program.

Less debatable is that Fakhrizadeh’s killing on the streets of Iran is almost certainly tied to deep, ongoing concerns about the direction of Iran’s nuclear program—and the scientist’s involvement in it.

Such a strike takes significant effort—and commitment—in a police state like Iran.

While we don’t know now—indeed, we may never know—the exact motivations behind Fakhrizadeh’s killing, recent reports and news leads us to be deeply troubled by developments in Iran’s nuclear program.

Indeed, according to a November International Atomic Energy Agency report, the U.N. organization responsible for monitoring Iran’s nuclear program, Tehran is in clear violation of the 2015 Joint Comprehensive Plan of Action (the Iran nuclear deal) on several accounts:

So what do these developments mean?

Of course, the Iran nuclear deal had envisioned that Iran’s breakout time under the agreement would be about one year or more if Tehran was in full compliance with the deal before its enrichment restrictions began to expire.

But based on the International Atomic Energy Agency’s quarterly report, it could now be much less than that.

This shortened timeline might allow Iran to rush to build a bomb in secret before parties to the nuclear deal (Russia, China, United Kingdom, France, and Germany) or other interested states like the U.S., Israel, and the Gulf states might find out.

Or, more importantly, could react to such a development.

Of course, Iran claims that its nuclear program is peaceful. But the death of this leading Iranian nuclear scientist and the November International Atomic Energy Agency report indicates that Iran’s nuclear program may very well—once again—be something other than peaceful.