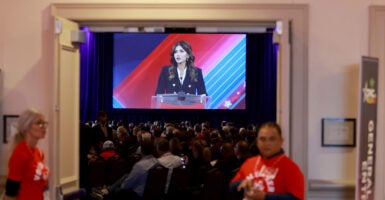 In the wake of the Russian invasion of Ukraine, South Dakota Gov. Kristi Noem called on President Joe Biden to resign unless he can demonstrate better leadership on the world stage.

“If Joe Biden can’t, or he won’t, do these things, then he should resign,” Noem said, drawing strong applause from the conservative audience. “He should resign before his weak leadership and poor decision-making drags America back into another needless war.”

Russian President Vladimir Putin’s full-scale invasion of Ukraine is a demonstration of what happens when the United States doesn’t show strong standing in the world, the governor said.

“Our hearts and our prayers are with the people of Ukraine. We are thinking about those families, their children, and the people that are being targeted right now,” the South Dakotan said, adding:

The hell of war has come to their country, and if we ever needed a reminder that leadership has consequences, that it matters, the last 48 hours have shown us what happens when America projects weakness. That is exactly what President Biden has done.

Noem added: “A strong American president would put their citizens first, and they would take these actions right away.”

The first move Biden should make, she said, would affect her state of South Dakota.

“No. 1, they would start and expedite the Keystone XL pipeline immediately,” Noem said.

They would reopen our federal lands for drilling and oil and natural gas exploration. They would revoke the bans on oil and gas leases on the outer continental shelf. They would sign an executive order to cut all of the regulations on domestic energy production and its transport to American and European markets.

She said Biden should also move to oust Russia from the Society for Worldwide Interbank Financial Telecommunication, or SWIFT, the primary international banking system. Such a move would effectively cut Russia off from global finance.

“A strong American president would work with European allies and partners to replace their Russian oil supplies with American energy, and they would hit Putin right where it actually hurts, by enacting heavy sanctions on the Russian energy sector,” Noem said. “They would lead NATO and other Western allies to cut Russia off from the Western economy banking and financial systems, including SWIFT.”