Indiana Parents’ Rights Over Their Child’s Education Are Threatened. Here’s What Parents Around the Country Need to Know. 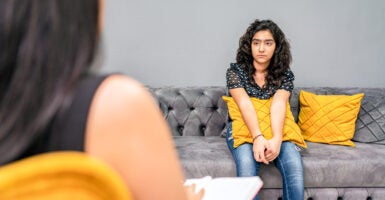 Parents and voters are taking every opportunity to reject racially biased teaching and sexually explicit classroom material. Through whistleblower activity and using their right to speak at school board meetings, families are advocating for their students’ interests, and state lawmakers should take notice.

Currently, a high-profile legislative proposal in Indiana is going in the wrong direction. Hoosier officials are considering an amended proposal that makes only a mild attempt at allowing parents to see what their children are being taught and no longer protects children from racial prejudice. State lawmakers are proposing to make it optional for school leaders to inform parents about the topics educators are teaching students.

Legislators recently replaced provisions from a proposal introduced earlier this year that would have required public school leaders to make textbook lists, course syllabi, and results of student surveys available to families with optional measures for disclosing school content. And that’s not the worst of it.

The latest version of the proposal struck key provisions that would have protected teachers from critical race theory’s racial bigotry. Lawmakers had considered preventing school employees from being compelled to affirm racist concepts, but such language has since been erased.

Students are also at risk under the proposal because lawmakers would allow school counselors and, potentially, unlicensed school employees to meet with students and provide “ongoing” therapeutic services without parents’ permission. School officials are required to “attempt” to contact parents. Parents have a limited window during which they can remove their children from this treatment before it begins.

Surveys find that parents do want school leaders to inform families about conversations that educators are having with children on gender identity, and parents want their children taught that slavery “was a tragedy that harmed the nation, but our freedom and prosperity represent who we are as a nation.” Indiana’s amended proposal dismisses parents’ priorities.

Those who argue that critical race theory and radical gender theory are not taught in Indiana schools should see the social media feed for Carmel Clay schools, a district located 30 minutes north of Indianapolis. There, district officials advertise their advocacy for transgender activism.

In January, the district hosted a speaker with “extensive research in colonialism, white supremacy, and concept of racism [sic],” who said students should avoid “othering [sic] of ‘BIPOC/LGTBQ+’” because it leads to “oppression”—all ideas straight from the canon of critical race theory and gender theory.

Indiana officials should move quickly and consider proposals that protect children from racial bias and empower families with access to course outlines, reading lists, and other class material. Lawmakers should say that no public official can compel a teacher or student to affirm any idea, but especially ideas that violate the Civil Rights Act of 1964.

This would mean, for example, that professional development programs for teachers could not require educators to profess that individuals should receive benefits or punishments based on the color of their skin—something the Indiana proposal, in its current form, should strengthen through a prohibition on compelled speech. Further, by specifically addressing compelled behavior, educators would be reminded that dividing students into mandatory affinity groups according to race for different school activities is discriminatory.

Such affinity groups have been the subject of a lawsuit in Illinois. A similar lawsuit unfolded in Massachusetts, where district officials dropped an affinity project after settling with Parents Defending Education.

Indiana lawmakers should also require school leaders to post textbook lists and assignments online so that parents can see what teachers are presenting to children. And legislators must make sure parents know what mental health interventions school counselors are planning to use, and, aside from a medical emergency, parents should be intimately involved with and have the final word on such treatment.

The San Francisco school board recall election last week, where voters unseated three board members with reputations for radical positions, was the latest in a string of voter activity that will help protect children from discrimination and aggressive sexual content in schools. Parents are advocating for their children—and Indiana lawmakers should defend the rights of both.