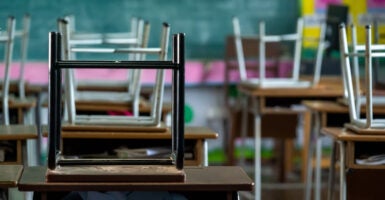 At the Santa Barbara Unified School District in California, teachers are given a plethora of politically radical resources that they are expected to implement in the classroom, which are now coming to light. (Photo: Cavan Images/Getty Images)

The school district of Loudoun County, Virginia, may have made the headlines for aggressively pushing far-left content onto students, including pornography and critical race theory, but other districts throughout the country are no better off.

At the Santa Barbara Unified School District in California, teachers are given a plethora of politically radical resources that they are expected to implement in the classroom, which are now coming to light.

Christy Lozano, a teacher at the Santa Barbara Unified School District, has revealed that teachers are expected to access a password-protected portal for teaching “culturally responsive material.” She has exposed the far-left content with Laura Ingraham, and she recently provided me with the materials as well.

The materials are laid out in numerous webpages, each encompassing a different progressive cause. Some of the category headings include “Black Lives Matter,” “Bilingual/Multilingual Advocacy Month,” and “LGBTQIA+ Month.” When I started to dig into the materials, it quickly became apparent that they were not simply educational tools.

Let’s begin with the Black Lives Matter materials. The page contains links to various BLM-related resources, segregated by age group. Under the preschool-to-second grade heading, there is a link to Black Lives Matter at School, an activist group dedicated to spreading the teachings and activism of BLM throughout the K-12 school system.

Its page includes recommendations on how to organize students to fight against “systemic racism,” including a link to a PowerPoint encouraging students to demand “restorative justice” from their district.

“Systemic racism” is the idea that racism is the normal state of affairs in American society, meaning that the ordinary American is racist. “Restorative justice” is the idea that the U.S. justice system is responsible for rehabilitating and emotionally caring for criminals. Make no mistake: The U.S. justice system, which is necessarily and obviously punitive, should not be remotely associated with the activities of a day care.

It also links to the 13 Guiding Principles of BLM, one of which includes “disrupting the Western-prescribed nuclear family structure.”

But the most shocking information was contained under the LGBTQIA+ page. The linked articles and discussion guides cannot be considered anything less than grooming, which is the emotional manipulation of children to make them more susceptible to sexual exploitation by adults.

Under a “Elementary Lessons and Resources” heading, the page links to several videos and written guides meant to be used in preschool-second grade classrooms. It includes a video and accompanying guide for “Sparkle Boy,” a story about a young boy who enjoys crossdressing. The guide claims “Teachers can challenge traditional gender bias” via the story and calls on teachers to help students “explore gender identity.”

It also links to a video and guide for “When Aidan Became a Brother,” a book about a young girl who “transitions” to a boy. The guide notes that teachers must be very careful to help students use proper terms and pronouns to refer to trans people. One of the reader’s response questions is, “How might your understanding of ‘being yourself’ have changed after reading ‘When Aidan Became a Brother’?”

Preschool-aged children are highly impressionable, and using books like “Sparkle Boy” and “When Aidan Became a Brother” are bound to create an unhealthy focus on one’s own sexuality at an extremely vulnerable age. It is quite conceivable that a normal 5-year-old girl, upon reading one of these books, suddenly decides she is trans based upon a classroom experience.

Conditioning children by presenting these ideas as objective truth begins the dangerous path of grooming them for future gender activism and self-doubt about their identity.

The programming continues for older children as well. At the high-school level, the resources include a TED Talk playlist about coming out, a biased gender term list put out by a leftist advocacy group, and a documentary exploring “the struggle for queer rights.” It also links to Gender Spectrum Groups, confidential online communities for students to explore their gender identity and sexuality.

Every single link on the teacher portal takes the reader to a queer ideology-affirming resource that promotes the queering of society.

The grooming nature of these materials is compounded by a “pronoun survey” disseminated in the district. One teacher required their students to fill out a Google form sharing their pronouns, with some of the options including “they/them/theirs,” “he/they,” and “other.”

The final yes/no question is, “Would you like to follow up with me (in a private conversation) about your pronouns?” To be clear: There is not a single situation in which it is remotely appropriate for a teacher to have a private conversation with a high school student about their gender identity and sexuality.

Taken in conjunction with prior questions that encourage deceiving one’s parents and adopting progressive ideas of gender, it would require numerous logical backflips to rationalize this classroom situation as anything short of grooming psychologically unstable minors.

There are two problems at the core of all these materials. First, they are unilaterally slanted in favor of progressive politics. While educational environments should certainly encourage students to consider controversial ideas, they must be balanced by opposing viewpoints as well.

Within the Santa Barbara Unified School District’s teacher portal, there is not a single resource that affirms biological reality or traditional views of gender, or questions whether the Black Lives Matter movement is anything but a pure struggle for moral advancement.

Secondly, there is no community transparency or accountability. Had these materials not been leaked by a teacher working in the school, neither I nor the public at large would have any idea of how deeply ingrained these ideas are in the district.

Parents have the right to know that their children are being exposed to radical propaganda at school and to respond accordingly if they disagree with the contents of a class.

Unless parents demand transparency, school districts will continue to shape the minds and very identities of our most vulnerable population.

The Santa Barbara Unified School District did not respond to a request for comment by press time.