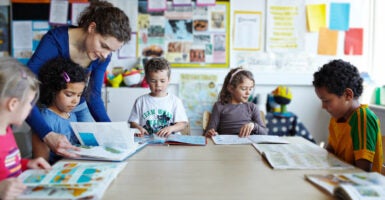 All students, regardless of race or ethnicity, should be treated with equality, as they are in this classroom. But in the public schools of Evanston and Skokie in Illinois, equality has been replaced with "equity," which is the opposite. (Photo: Klaus Vedfelt/DigitalVision/Getty Images)

According to a lawsuit filed by the Southeastern Legal Foundation on behalf of teacher Stacy Deemar, the Evanston/Skokie School District 65 in northern Illinois has been forcing its teachers and students to engage in programming that discriminates against individuals on the basis of race in violation of both federal civil rights law and the U.S. Constitution.

The factual allegations made by the Southeastern Legal Foundation against District 65 are astonishing.

They include claims that District 65 (1) trained its teachers that “to be less white is to be less racially oppressive,” that “white identity is inherently racist,” and that teachers who disagree with these principles are “racists”; (2) taught its students that treating people equally “helps racism”; (3) engaged in race-shaming, such as racially segregated teacher and student “privilege walks”; and (4) directed the use of racially segregated “affinity groups” in which teachers were divided based on their race or racial identification.

These are just a few of the shocking allegations contained in the complaint.

The use of “affinity groups” was the subject of a federal civil rights complaint that was brought to the attention of the U.S. Department of Education’s Office for Civil Rights during the Trump administration.

While that office determined in January that the district’s use of those groups was discriminatory and a violation of Title VI of the Civil Rights Act of 1964, the same office under the Biden administration suspended that decision shortly after President Joe Biden’s inauguration, employing a dubious interpretation of federal civil rights law that is fast becoming a hallmark of this administration.

By vowing to define its teachers and students solely by their race, District 65 promotes and reinforces a view of race essentialism that divides Americans into groups based solely on their skin color.

District 65 teaches its teachers and students that their whole identity comes from the color of their skin. It teaches them to hate each other. It teaches them not only how to be racist, but that they should be racist. This is illegal, wrong, and must be stopped.

Title VI expressly prohibits discrimination based on race, color, and national origin in programs and activities receiving federal financial assistance, which would include educational institutions funded through the Department of Education.

The implementing regulations of Title VI prohibit a recipient of federal funding from providing any service or other benefit to a student that is different, or provided in a different manner, than to another student on the basis of race.

The regulations also prohibit recipients from subjecting an individual to segregation or separate treatment in any matter based on race.

Despite that, and the requirement that it adhere to the edicts of Title VI, District 65 is open about why it thinks its “racial and educational equity policy” is needed, stating:

The purpose of this policy is to establish a framework for the elimination of bias, particularly racism and cultural bias, as factors affecting student achievement and learning experiences, and to promote learning and working environments that welcome, respect, and value diversity.

Further, the purpose is to establish particular actions that District 65 shall take to disrupt the school-to-prison pipeline, to address disparities in educational opportunity and achievement while understanding the urgency with which we must move to support Black, Latinx (sic), and multiracial students.

District 65 is committed to focusing on race as one of the first visible indicators of identity … .

As the teachers unions and progressive cabal on Capitol Hill continue in their attempts to thwart pushback on critical race theory, ground-level efforts to cement the new “anti-racism” racism have increased in the curriculum, despite the fact that America is not nearly as racist as we’ve been led to believe.

While equality is the legal principle articulated in the Constitution and the nation’s laws that form the basis for equivalent opportunity and legal protection for all, District 65 says its necessary focus on equity “goes beyond the definition of equality—where students are treated the same—to fostering a barrier-free environment where all students’ unique needs are addressed and supported by resources which are allocated in a fiscally responsible manner.”

America’s newfound obsession with racial identity has fostered a new racism, a type of “neo-segregation” that turns federal civil rights laws on their head by forcing individuals to be classified, segregated, and instructed on the basis of their race.

In Shaw v. Reno (1993), the U.S. Supreme Court made clear that classifications of citizens based solely on their race are by their very nature odious to a free people whose institutions are founded upon the doctrine of equality. They threaten to stigmatize individuals by reason of their membership in a racial group and to incite racial hostility.

The Southeastern Legal Foundation’s lawsuit—the first of its kind targeting the woke racial pedagogy of modern education—has the potential to make history in courts and classrooms nationwide.

Parents everywhere can only hope.