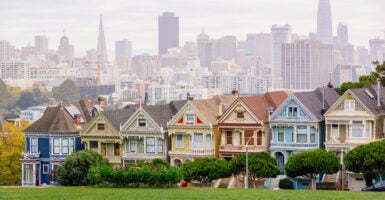 The San Francisco School Board announced that it would put the renaming of 44 schools in the district on hold. (Photo: Alexander Spatari/Getty Images)

Editor’s note: Under public pressure and facing a mass recall, the San Francisco School Board announced that it would put the planned renaming of 44 schools on hold. The list of names deemed racist included Abraham Lincoln, George Washington, and Paul Revere, among many others.

The following is a republished op-ed by Jarrett Stepman explaining why the relentless push to erase history is often divorced from fact or truth and why it’s such an ominous trend for the future of the country if it continues unchecked.

The school board’s decision to at least postpone renaming demonstrates how shining light on radicalism can make authorities and people in power change their behaviors:

Does the truth matter? Not if you’re the woke president of the San Francisco Board of Education, apparently.

A revealing interview by The New Yorker with the San Francisco school board president, 30-year-old Gabriela López, gave some insight into the mindset of a public school board that just decided that 44 of its schools needed to be renamed because of their “racist” ties.

She pointed to a ridiculous claim that Lincoln was somehow particularly guilty of killing “indigenous people.” When pressed about what she personally thought about Lincoln, she said:

But according to the San Francisco Board of Education, Lincoln didn’t do enough for black lives. His accomplishments just aren’t good enough to earn praise from board members, whose heroic accomplishments include drawing up purge lists and making sure teachers and students can’t get into classrooms.