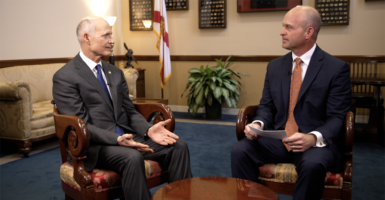 It’s past time for the dominant media to “show up” and report on a special counsel’s court filings alleging political espionage targeting Donald Trump before and after he became president and instigated by the Hillary Clinton campaign, Sen. Rick Scott, R-Fla., says.

“The media just went along with the Democrat narrative [claiming collusion between Trump and Moscow]. So they need to start holding someone accountable,” Scott tells Heritage Foundation President Kevin Roberts in a podcast interview. “The media need to start showing up.”

Attorney General Merrick Garland also must give special counsel John Durham the resources for a “thorough investigation,” the Florida Republican adds on the second episode of “The Kevin Roberts Show.”

“Let’s get the facts, so we’ll know,” Scott says. “And if you did something wrong, you need to be held accountable.”

Scott led a Feb. 16 letter to Garland from 45 senators asking that the attorney general continue to respect Durham’s prosecutorial independence and ensure that he has all necessary resources.

“They’re going to try to hide it,” Scott replies when asked by Roberts what he expects President Joe Biden and his administration will do once the special counsel produces a report on the origins of the Trump-Russia probe.

“They are so scared of the media knowing things,” he says. “It’s our country, it’s our government. We should know everything.”

In the interview, Scott also discusses the future of COVID-19 mandates and the difficulty of convincing Democrats to rein in government spending.

The Conservative Oversight Project is designed to keep the pressure on media bias by amplifying the facts on the Durham investigation and other major issues such as border security and Big Tech censorship of conservative ideas.

“We’re going to go out there and change the game,” Howell says.