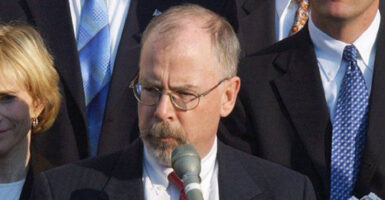 Special counsel John Durham—seen here outside federal court in New Haven, Connecticut—is exposing that everything the Clinton campaign did here was to politicize national security agencies, sharing its smears with the FBI and the CIA to spur spying on Trump advisers and to inflame media coverage. (Photo: Bob MacDonnell/Hartford Courant/Tribune News Service/Getty Images)

There’s a second wave of media reaction to John Durham’s latest filing on the origins of the Trump-Russia investigation.

The first wave was silence, hoping somehow the whole story would vanish. Now, the second wave is “Explainers,” which attempt to hem and haw defensively through the whole business.

The Associated Press “Explainer” was headlined “How the latest Trump-Russia filing generated buzz.” This article was sent to me on Twitter by a fellow who apparently hates Donald Trump with the energy of a thousand suns, so that illustrates the type of people who eagerly share these dismissive articles.

The AP reporter on this was Eric Tucker. He channeled all the rebuttals of Michael Sussmann, the Hillary Clinton-connected lawyer who Durham had indicted for lying (omitting his ties to Clinton).

Tucker helpfully tweeted the Democratic line: “Sussmann’s lawyers struck back at Durham’s team over its inclusion in the court filing of allegations they said were false and ‘intended to further politicize this case, inflame media coverage, and taint the jury pool.’”

Get out the laugh track. This is the threat that Durham represents. He is exposing that everything the Clinton campaign did here was to politicize national security agencies, sharing its smears with the FBI and the CIA to spur spying on Trump advisers, to inflame media coverage, and then to taint the judicial process through the Mueller team, where 11 of 16 prosecutors were Democrat donors. Five of them were Clinton donors.

Tucker also had to pounce on the “S-word.” It’s not spying! They were “mining information” to establish an “inference” tying Trump to Russia. “The researchers were not ‘spying’ on the Trump campaign in 2016 but were instead working at the request of federal officials to investigate Russian malware attacks that had targeted the U.S. government and the White House.”

A similar spin came from taxpayer-subsidized NPR, under its internet headline “The John Durham filing that set off conservative media, explained.” Its online summary of the “All Things Considered” story blatantly editorialized, “The political right is making hay out of a recent filing in special counsel John Durham’s investigation into the Trump-Russia probe. We break down the truth behind their outlandish claims.”

Outlandish? Fill-in host Elissa Nadworny asserted, “Fox News even said Clinton had, quote, ‘infiltrated Trump Tower and the White House.’ But is that what Durham actually said?” Reporter Ryan Lucas replied, “No. Durham never said in his filing that Clinton paid operatives to spy on Trump or his campaign. He never used the word ‘infiltrate.’”

All of this parsing sounds like saying Bill Clinton never had “sex” with Monica Lewinsky, since he claimed it was all oral sex. Nadworny implied this was ancient history: “So, all of this is tied up in events that happened five or six years ago. Why does it matter now?” Lucas explained, “Trump had hoped that Durham would deliver a report before the 2020 election that could help Trump’s campaign. That, of course, didn’t happen. But the battle over shaping perceptions is still very much raging.”

NPR is aggressively “shaping perceptions” that conservative media manufactures “outlandish” claims that mangle the truth. This is also how The New York Times and The Washington Post climbed on the bandwagon, ranting about conservative “conspiracy theories watered with fresh misinformation.”

So, the media that pushed a phony dossier with “pee tapes” and implied regularly that Trump was either happily colluding with the Russians or being blackmailed by the Russians is lecturing the rest of us about empty conspiracy theories.

The largest fraud in everything now unfolding is that there’s a conservative media and then there’s a “reality-based press.”