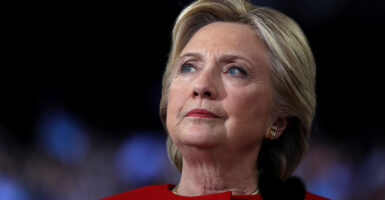 Special counsel John Durham is slowly, but steadily, peeling back the many layers of the onion that is the Russian collusion hoax that targeted Donald Trump's 2016 presidential campaign. Pictured: Then-presidential rival Hillary Clinton speaks at a campaign rally at North Carolina State University on Nov. 8, 2016, in Raleigh, North Carolina, in a final campaign swing less than 24 hours before Election Day. (Photo: Justin Sullivan/Getty Images)

With the latest filing by special counsel John Durham, a chilling story continues to unfold even though most mainstream media outlets are downplaying it.

The story: A presidential campaign quite possibly used its allies in the tech sector to engage in political espionage—not just against the opposition candidate, but against a sitting president. The underhanded activity even improperly exploited sensitive communications from the White House.

On Feb. 11, Durham filed a motion about potential conflicts of interest by Latham & Watkins, the law firm defending former Perkins Coie partner Michael Sussmann. Sussmann fed the FBI a false story about a claimed “covert communications channel between the Trump Organization and a Russia-based bank,” identified in news reports as Alpha Bank.

Let’s go back in time to provide some context.

Sussmann has been charged with lying to the FBI. When he handed over the bogus information to the bureau, he told it he wasn’t acting on “behalf of any client.” Durham’s motion alleges that, in fact, Sussmann had “assembled and conveyed the allegations to the FBI” on behalf of Hillary Clinton’s presidential campaign and a “technology executive” at a U.S.-based internet company. Significantly, Sussmann’s partner, Marc Elias, was the general counsel for Clinton’s 2016 campaign.

The technology executive, referred to as “Tech-Executive-1” in the motion, has been identified as Rodney Joffe, an entrepreneur and internet data expert. According to Durham’s motion, starting in July 2016, Joffe “exploited his access to non-public and/or proprietary internet data” to “mine internet data to establish ‘an inference’ and ‘narrative’ tying then-candidate [Donald] Trump to Russia.”

Joffe even “enlisted the assistance of researchers at a U.S.-based university, who were receiving and analyzing large amounts of internet data in connection with a pending federal government cybersecurity research contract.” (Emphasis added).

This cyberespionage and “mining” of data continued after the election and reached into the Executive Office of the President at the White House. How could that possibly happen? It could because Joffe and his company “maintain[ed] dedicated servers for the EOP as part of a sensitive arrangement whereby it provided [Domain Name System] resolution services to the EOP,” according to Durham’s motion.

Joffe “and his associates exploited” that access “for the purpose of gathering derogatory information about [then-President] Donald Trump.”

Remember how the media made fun of Trump and called him paranoid for claiming his communications were being tapped? Turns out he may well have been right.

According to Durham, Joffe and his cohorts were already collecting Trump’s internet traffic at Trump Tower and at his Central Park West apartment building, before moving on to the White House when he became president.

Why would Joffe get involved in such nefarious spying and cyber hacking? According to Durham, Joffe said “he was seeking to please certain ‘VIPs,’ referring to individuals at [Perkins Coie] and the Clinton campaign.”

That, of course, raises the obvious question: Which individuals inside the Clinton campaign knew and approved of what Joffe was doing? How high up did this go? Durham’s motion doesn’t answer these very important questions.

Perhaps Durham already knows the answers to those questions. There may be other shoes to drop. We will just have to wait and see.

Neither Joffe nor any of his fellow cyber co-conspirators have been criminally charged, and the usual five-year statute of limitations that applies to many violations of federal law may have run out.

But keep in mind that, under the Computer Fraud and Abuse Act, 18 U.S.C. §1030, intentionally accessing a computer including “any nonpublic computer of a department or agency of the United States [which would include the White House] without authorization” can get you up to 10 years in prison.  And it’s a violation when someone “exceeds authorized access,” which would certainly apply to what was happening, at least as described in Durham’s motion.

We know that many tech companies have been captured by leftist ideology and are manipulating and censoring the flow of information, which is bad enough. But actually spying on a presidential candidate and then on the president? That’s astonishing.

All of these individuals, universities, and companies need to be outed, publicly shamed, and barred from receiving government contracts or research funds, even if they are not criminally prosecuted. Anybody who is willing to exploit their internet access to sensitive information for partisan political purposes cannot be trusted in the cybersecurity area.

In June 1972, a break-in occurred at the offices of the Democratic National Committee at the Watergate Hotel in Washington. As we now know, operatives from President Richard Nixon’s reelection campaign were there to tap phones and steal documents. It was probably the biggest scandal in the history of American politics, and it led to the downfall of a president.

As the Durham investigation continues, we will learn whether we have seen history repeat itself, but this time with sophisticated cyber tools replacing ordinary burglars’ tools. The technology may have changed, but the profound wrongness of this type of behavior has not.