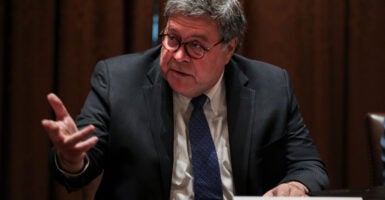 Barr has extended the protection of Justice Department regulations to Durham. These regulations will make it difficult for a new attorney general in a Biden administration (assuming President Donald Trump’s legal challenges to the election don’t succeed) to do what Democrats, such as Rep. Adam Schiff, D-Calif., have made clear they would want him to do; namely, fire Durham and end the investigation.

The fondest wish of Democrats in Congress is apparently to ensure that no officials in the FBI or the Obama Justice Department are punished for their misconduct and misuse of their authority for instigating an unjustified, partisan investigation of false allegations that Russia worked with the Trump campaign to help Trump be elected president in 2016.

As the politically appointed U.S. attorney for Connecticut, Durham serves—like all political appointees—at the pleasure of the president. Thus, assuming Biden becomes president, he could fire Durham the moment he takes office, ending Durham’s investigation. In fact, President Bill Clinton initiated such a mass firing in March 1993, removing all 93 U.S. attorneys two months after becoming president.

In other words, Durham can get whatever staff he needs from the Justice Department to continue what he has been doing since 2019 as a U.S. attorney—probing who was involved in investigating the Trump campaign over the false claim that campaign officials were colluding with Russia four years ago.

Or as the order obtained by Fox News states, Durham now has the power “to investigate whether any federal official, employee, or any other person or entity violated the law in connection with the intelligence, counter-intelligence, or law-enforcement activities directed at the 2016 presidential campaign, individuals associated with those campaigns, and individuals associated with the administration of President Donald J. Trump.”

Durham’s appointment takes him out from under the direct supervision of the attorney general, including a new attorney general who might want to sideline or marginalize his investigation.

The regulations state that the special counsel has “the full power and independent authority to exercise all investigative and prosecutorial functions of any United States Attorney” and “shall determine whether and to what extent to inform or consult with the Attorney General … about the conduct of his or her duties and responsibilities.”

Moreover, the special counsel is not “subject to the day-to-day supervision of any official of the Department.”

The special counsel is required to provide the attorney general with a “confidential report” at the end of his work “explaining the prosecution or declination decisions reached by the Special Counsel.”

The attorney general can also request that the special counsel “provide an explanation for any investigative or prosecutorial” action and may order that action “not be pursued” if the attorney general concludes that it is “inappropriate or unwarranted under established Departmental practices.”

So, if some former Obama administration official complains to a Biden White House or a Biden attorney general that he is being investigated, subpoenaed, or interviewed, Durham can’t be told by the attorney general to stop what he is doing unless it is “inappropriate or unwarranted.”

If the attorney general takes such action to squash something the special counsel wants to do, he is required under the regulation to “notify Congress.”

Durham has the ability to propose a budget, and the Justice Department is directed to provide him with “all appropriate resources.” Special counsel Robert Mueller spent nearly $32 million in “appropriate resources” over two years and had a very large staff.

Most importantly, and probably the key reason why the Durham appointment was made, is that under the Justice Department regulations, Durham can only be removed from office by “the personal action of the Attorney General.”

In addition, the attorney general—whoever he or she might be—will only be able to remove Durham for “misconduct, dereliction of duty, incapacity, conflict of interest, or for other good cause.” In other words, Durham can’t be removed just because a Biden administration thinks Durham’s investigation is politically embarrassing for Joe Biden’s friends, allies, and supporters at risk of prosecution.

The constitutional argument can be made that any president can fire a special counsel, regardless of any Justice Department regulations. As the Supreme Court said in 1926 in Myers v. U.S., the president’s authority under Article II, Section 2 of the Constitution to appoint officers of the executive branch necessarily carries with it the authority to remove such officers (with certain exceptions, such as federal judges).

Would a President Joe Biden fire Durham so he can’t complete his investigation into the Russia collusion hoax? Maybe, but Barr has made it more difficult for Biden to do so, especially from a political and public relations point of view.

This column originally appeared at Foxnews.com.