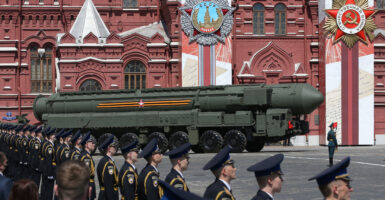 Russia maintains a stockpile of more than 2,000 tactical nuclear weapons that it incorporates into its warfighting strategy. Pictured: A Russian nuclear missile rolls along Red Square in Moscow during a June 24, 2020, military parade marking the 75th anniversary of the defeat of Nazi Germany in World War II. (Photo: Mikhail Svetlov/Getty Images)

Moscow announced Friday it would begin massive nuclear drills over the weekend that will entail practice launches of its intercontinental ballistic missiles and cruise missiles.

While it’s not out of the ordinary for a nuclear power to rehearse its nuclear forces, this is no ordinary exercise. It comes at a time when Russia has more than 150,000 troops amassed around the Ukrainian border and appears poised to invade at any time.

This isn’t to say that Russia will launch a nuclear first strike at Ukraine or elsewhere. But it does serve to remind us that nuclear weapons are an unfortunate reality of today’s unsettled world.

Many Americans prefer to view nuclear conflict as a relic of the Cold War. Some groups advocate for dismantling our nuclear forces. Last month, the White House boasted of a statement it signed with Russia, China, Great Britain, and France affirming that nuclear war can never be won and, therefore, should never be fought.

Yet, Russia’s actions make it clear that Moscow does not share that view.

Russia maintains a stockpile of more than 2,000 tactical nuclear weapons that it incorporates into its warfighting strategy. Under its “escalate to win” doctrine, Moscow seems to mistakenly think it can employ low-yield nuclear weapons to compel NATO to back down in a conflict.

As part of its force buildup around Ukraine, Russia deployed its Kinzhal nuclear-capable hypersonic missiles to the Kaliningrad enclave that borders NATO members Poland and Lithuania.

Earlier this month, Russian President Vladimir Putin issued a subtle nuclear threat by reminding the West that should Ukraine join the NATO alliance, “Russia is one of the leading nuclear powers and is superior to many of those countries in terms of the number of modern nuclear force components.”

Now, Putin is personally overseeing a major nuclear drill as tensions ramp up over Ukraine.

Since Ukraine is not a member of NATO, there’s no obligation for NATO states to come to Ukraine’s defense should Russia invade. But many analysts have surmised that if Russia perceives itself to be successful in Ukraine, a Baltic state that is a NATO member could be next. Or, fighting in Ukraine could spill over into neighboring NATO states, dragging them into the conflict.

Putin’s blatant willingness to flex his nuclear muscle over conflict in Ukraine comes as a warning as to what could happen in a greater conflict with NATO.

Meanwhile, back in the United States, President Joe Biden has expressed his wish to reduce the role of nuclear weapons in U.S. strategy. Members of the far-left side of his party are pushing him to cancel the replacement program for our ICBMs that are more than 50 years old. And as part of its upcoming nuclear posture review, the Biden administration is reportedly contemplating cutting nuclear capabilities that are critical for deterring Russian nuclear aggression.

One such weapon is a low-yield, nuclear cruise missile that would be launched from attack submarines. That capability could be deployed to the European theater to show Russia that any use of its many tactical nuclear weapons will be met with a proportional response.

Cutting nuclear weapons at a time when Russia is backstopping its conventional aggression with the threat of nuclear force would signal to Russia that the U.S. is not serious about nuclear deterrence. It could also send the message to our allies that the United States might waffle over its extended deterrence commitments.

For nuclear deterrence to be credible, the United States must communicate its resolve to use nuclear weapons if necessary. Committing to reducing the role of nuclear weapons would do just the opposite, especially as Russia emphasizes nuclear weapons in its own strategy.

As much as U.S. policymakers would like to wish away nuclear weapons from existence, unfortunately, the enemy gets a vote.