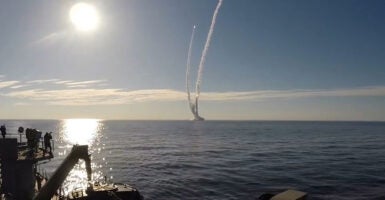 Because the disparity between Russian and U.S. tactical nuclear weapons is so large, Moscow may perceive a NATO nuclear response to lack credibility. Pictured: Russian Navy Northern Fleet's nuclear missile cruiser submarine test launches a Bulava missile in the White Sea in northwest Russia. (Photo: Ministry of Defense of the Russian Federation/TASS/Getty Images)

If asked, most Americans probably believe the U.S. and Russia are pretty evenly matched on nuclear weapons due to arms control treaties such as the New Strategic Arms Reduction Treaty—aka New START.

Indeed, with Russia threatening a large-scale invasion of Ukraine at any moment, now is a good time to take note of a little-spoken-of, but glaring, imbalance in our nuclear arsenals—and how it could affect our interests in Europe.

Today, while open-source numbers are fuzzy, Russia has about 2,000 nonstrategic nuclear weapons, while the U.S. has about 200 total—with half in the U.S. and half in Europe as part of NATO.

OK, so what? No one is ever going to use nukes anyway, right?

Well, major nuclear weapons states, including Russia, have said that a nuclear war should never be fought. But there are deep concerns among security analysts about whether the Russians really believe that.

Russia is believed to have what is called an “escalate to deescalate” doctrine for its battlefield nukes. Indeed, this doctrine might be better called “escalate to terminate—and win.”

The idea is Russia might employ one (or more) tactical nuclear weapon during a conventional conflict with NATO forces to prevent a defeat, consolidate gains, or even freeze a conflict in place without further fighting.

Because the disparity between Russian and U.S. tactical nuclear weapons is so large, Moscow may perceive a NATO nuclear response to lack credibility.

An example here is helpful.

Moscow, concerned about the inferiority of its military in this fight with U.S.-led NATO, contemplates exploding a low-yield nuclear weapon somewhere in theater as a warning of worse things to come.

In Moscow’s eyes, perhaps NATO will become concerned about the escalation of the fighting from the conventional to the nuclear—especially Russia’s potential use of more powerful nuclear weapons against European and American cities—and pause its counteroffensive against Russian forces.

Indeed, Moscow may misperceive that if NATO does not have the tactical nuclear capabilities to respond in kind, it would likelier back down than launch a high-yield, strategic weapon at Moscow and risk further escalation.

Hanging on to its advantage, Moscow can threaten additional nuclear strikes unless fighting ends on Russia’s terms. In Russia’s ideal world, NATO might decide that there is no good option available to respond and decides to cease hostilities, locking in Moscow’s ill-gotten gains.

With these calculations in mind, Russia takes the gamble and explodes a 10-kiloton nuclear weapon in the European theater, and nuclear deterrence fails for the first time in history.

So, what does nuclear conflict with NATO have to do with Ukraine?

If Russia perceives itself successful in its latest adventurism in Ukraine it could certainly embolden Moscow to try to expand Russia’s sphere of influence in Europe, including by attacking NATO members.

As we have seen so far—from information campaigns to cyberattacks to military movements—Russia will use every tool in its kit to achieve its geopolitical goals.

That approach could include the use of tactical nukes at some point against NATO—meaning these so-called small Russian nukes are a potential big problem for us and our allies.