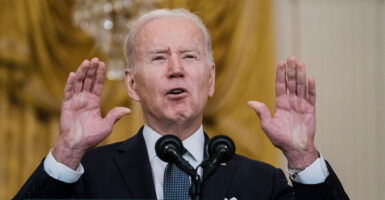 The Federal Energy Regulatory Commission announced that it will begin to “undertake a robust consideration” of the environmental justice impacts of such fossil fuel projects before granting approval, according to a fact sheet published Thursday.

The agency, which is the top regulator of domestic natural gas infrastructure, said its new policy will presume projects that cause 100,000 metric tons of carbon dioxide per year will have a significant impact on the environment.

In a major departure from its past policy, the FERC may also consider the eventual emissions caused by both upstream production and eventual burning of gas transported in a pipeline requiring approval.

“I believe today’s long overdue policy statements are essential to ensuring the Commission’s natural gas siting decisions are reflective of all stakeholder concerns and interests,” FERC Chairman Rich Glick said in a statement. “We have witnessed the impact on pipeline projects when federal agencies, including the Commission, fail to fulfill their statutory responsibilities assessing the potential effects of a project on the environment, landowners and communities.”

The announcement Thursday marked the first time the commission updated its natural gas policy since 1999. Rep. Frank Pallone, D-N.J., chairman of the House Energy and Commerce Committee, applauded the policy change, saying it was “necessary and long overdue.”

“For far too long, FERC has allowed private pipeline developers to call the shots, while cutting those affected by the projects out of the process,” Gillian Giannetti, Natural Resources Defense Council senior attorney, said in a statement. “Communities and landowners will now have a say before new pipelines cut across their land or new compressor stations are built near their homes.”

“FERC will now need to follow through and permanently establish a meaningful climate test for pipelines,” she added.

But the new policy also attracted criticism from both Democratic and Republican lawmakers.

“Today’s reckless decision by FERC’s Democratic Commissioners puts the security of our nation at risk,” Sen. Joe Manchin, D-W.Va., chairman of the Senate Energy and Natural Resources Committee, said in a statement. “The Commission went too far by prioritizing a political agenda over their main mission—ensuring our nation’s energy reliability and security.”

“The only thing they accomplished today was constructing additional road blocks that further delay building out the energy infrastructure our country desperately needs,” he added.

Sen. John Barrasso, R-Wyo., the committee’s ranking member, added that the FERC decision proved the administration was “determined to make it nearly impossible” for Americans to access affordable natural gas.