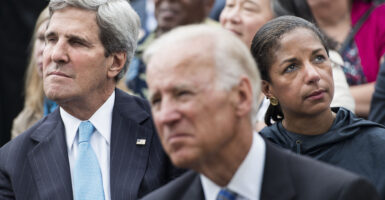 Biden administration officials who also were prominent in the Obama administration include John Kerry, left, and Susan Rice, pictured with then-Vice President Joe Biden on Aug. 28, 2013, as they listen to President Barack Obama speak at the Lincoln Memorial. (Photo: Brendan Smialowski/AFP/Getty Images)

President Joe Biden not only has recycled personnel from the Obama administration, but in some cases the Clinton administration, notes a new report from Sen. Mike Braun, R-Ind.

Braun’s report, released Wednesday and titled “Joe Biden Groundhog Day: How the Swamp Keeps Coming Back, Again and Again,” characterizes 19 individuals as “bureaucrats who keep popping up over and over again in D.C.”

Some of the more high-profile officials in the Biden administration who used to work in the Obama administration include Susan Rice, John Kerry, Ron Klain, and Jake Sherman.

Of the 19 flagged by Braun’s report, Biden was able to appoint five top White House jobs without Senate confirmation.

“Coming from the private sector more recently than many of my other Senate colleagues, I know experience doesn’t mean anything if you are not producing results,” Braun told The Daily Signal in a phone interview Thursday.

“No matter how poorly some of these people have done in the past, if they have recognizable names and are part of the administrative clique, they will be back,” Braun added. “The same is true to a degree with Republican administrations. But for Democrats, the government is their cathedral.”

In a written statement accompanying his report, Braun said:

They keep hiring the same people, and expecting different results. This cycle of incompetence in the federal government has made us all into Bill Murray in the movie ‘Groundhog Day,’ forced to relive the same day over and over. Americans deserve a government full of people who have done something in the real world, not the same cycle of failed policies and unqualified bureaucrats.

This report highlights officials nominated or serving in the Biden administration that the country will likely be all too familiar with—individuals that Americans have seen for years, and who are continuing to advocate for policies proven to fail in the past. This report also highlights individuals placed in positions of influence and power by President Biden that many believe could not successfully navigate a Senate confirmation process but continue to find residency in Washington.

Braun told The Daily Signal that Biden administration officials who didn’t need to do so probably could have won Senate confirmation anyway.

“Most would make it through even if you had them under Senate scrutiny, considering how lockstep partisan the Senate is and most Democrats toe the line,” the Indiana Republican said.

Secretary of State Antony Blinken was in two previous Democratic administrations: He was President Barack Obama’s deputy national security adviser and, in the Clinton administration, a senior director for strategic planning.

Homeland Security Secretary Alejandro Mayorkas was director of U.S. Citizenship and Immigration Services for the entirety of the Obama administration.

Rice, director of the Domestic Policy Council under Biden, made a comeback after serving first as Obama’s United Nations ambassador and later as his national security adviser. Rice’s chance to become secretary of state was thwarted after she said on the Sunday talk shows that the 2011 terrorist attack on U.S. facilities in Benghazi, Libya, erupted from a “spontaneous protest.”

Klain, now White House chief of staff, was Biden’s chief of staff as vice president. Obama tapped Klain in 2014 to be his administration’s Ebola response coordinator.

Kerry, Obama’s second secretary of state, now serves as Biden’s special presidential envoy for climate. As secretary of state, the former Massachusetts senator led the United States into the multilateral Iran nuclear deal as well as the Paris Agreement on climate change.

Surgeon General Vivek Murthy served in the same role during the Obama administration.

This report was updated shortly after publication to include quotes from an interview with Sen. Mike Braun.