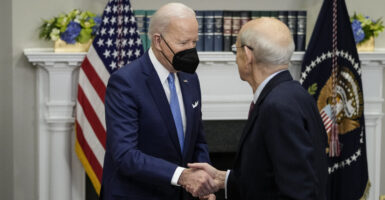 A White House official is just one example of the role a for-profit company plays in President Joe Biden's pending nomination of a new Supreme Court justice.   Pictured: Biden thanks Justice Stephen Breyer on Jan. 27 after he announced his coming retirement at the White House. (Photo: Drew Angerer/Getty Images)

Before becoming a White House official helping President Joe Biden pick his first Supreme Court nominee, Paige Herwig was a founding member of a legal group—bankrolled by a liberal political consulting firm—that drafted a list of possible justices for the Biden campaign.

Arabella finances a host of liberal nonprofits. These include the Sixteen Thirty Fund, which founded the group Demand Justice to thwart President Donald Trump’s judicial nominees and give Biden a list to work from in choosing his.

Arabella-financed organizations, as well as others that don’t disclose donors, often are called “dark money” groups by critics.

The Judicial Crisis Network, a conservative legal group dedicated to “a fair and impartial judiciary,” recently launched a $2.5 million ad campaign asserting that Biden would pick “an Arabella judge” for the Supreme Court as part of a “huge payback” to Arabella Advisors for promoting Democrats.

A spokesman for Arabella Advisors said the Judicial Crisis Network’s ad is “false” and “mischaracterizes” the consulting firm and its philanthropy.

Here’s what to know about Arabella Advisors’ ties to Biden’s pending Supreme Court nomination to fill the seat that will be vacated by Justice Stephen Breyer.

Before becoming White House senior counsel  and part of the inner circle in helping Biden pick his first nominee to the Supreme Court, Herwig was part of the founding team at Demand Justice.

Herwig was Demand Justice’s deputy chief counsel in 2018. She left to work for Facebook until going to the White House as senior counsel and advising Biden on judicial appointments.

The White House announced last week that Biden had tapped a team to lead the search for a Supreme Court nominee who would face confirmation by a Senate split 50-50 between Republicans and Democrats (including two independents).

In another connection, White House press secretary Jen Psaki was a communications consultant for Demand Justice and on the advisory board of Supreme Court Voter, a project of Demand Justice.

While still possible, Demand Justice sought to capitalize early in a Biden presidency with a narrow Democrat Senate majority by trying to push Breyer to retire from the high court before Republicans regained control of the White House and Senate.

Demand Justice ran an ad campaign and hired a billboard truck to drive around the Supreme Court to circulate a message calling on Breyer to retire.

The message on the truck read: “Breyer, retire. It’s time for a Black woman Supreme Court justice. There’s no time to waste.”

The group’s supporters on Twitter credited it with successfully pushing Breyer to retire, which he announced Jan. 27.

“Justice Breyer understands the political cycle. He was a staffer for Ted Kennedy on the Senate Judiciary Committee,” Severino told The Daily Signal. “This bullying probably caused him to delay his retirement.”

Demand Justice’s so-called shortlist for Biden’s Supreme Court nominees actually includes 43 names. Of those, 14 appear to meet the president’s two chief qualifications: that the nominee be both a woman and black.

As a presidential candidate, Biden promised to  appoint the first black woman to the high court.

California Supreme Court Justice Leondra Kruger is also on the Demand Justice list, and the White House reportedly is considering her for the spot as well.

Someone not on the list is U.S. District Judge Michelle Childs in South Carolina, whose nomination is being pushed by both House Majority Whip James Clyburn, D-S.C., and Sen. Lindsey Graham, R-S.C.

Spokespersons for the White House and Demand Justice did not respond to The Daily Signal’s inquiries before publication of this report.

Demand Justice began in 2018 as a project of the Sixteen Thirty Fund, a 501(c)(4) nonprofit public policy advocacy group established by Arabella Advisors.

However, in May 2021, Demand Justice registered in Washington, D.C., as its own 501(c)(4) nonprofit, spinning off from the Sixteen Thirty Fund, according to Capital Research Center, an investigative think tank.

“Demand Justice has been a front group for Arabella Advisors, the center of dark money groups,” the Judicial Crisis Network’s Severino said.

“The claims in this advertisement are false, and they deliberately mischaracterize the work of Arabella Advisors and several of our clients,” Arabella spokesman Steve Sampson told The Daily Signal in an email.

Sampson confirmed that Demand Justice no longer is a fiscally sponsored project of the Sixteen Thirty Fund.

“It is rare that Arabella-sponsored groups spin off. You wonder if so much attention is becoming an embarrassment or liability,” Ludwig told The Daily Signal.

In February 2021, Demand Justice joined seven other left-leaning groups to form Unrig the Courts, a coalition pushing for packing the Supreme Court.

Two other groups in the Unrig the Courts coalition, 51 for 51 and Just Democracy, also are bankrolled by Arabella-financed groups.

Eric Kessler, who founded Arabella Advisors, is a former Clinton administration official who previously worked for the League of Conservation Voters.

The consulting firm’s nonprofit entities distribute cash. The network has raised around $4.7 billion and spent around $3.3 billion since 2006, public reporting shows, according to Capital Research Center.

“The Arabella-funded groups have been normalizing wild-eyed, radical ideology,” Capital Research Center’s Ludwig said. “Arabella’s role has been to take big money and push the Democratic Party and the country further and further left.”