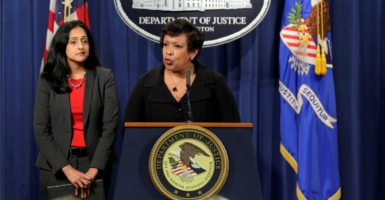 Vanita Gupta, the acting head of the U.S. Justice Department’s Civil Rights Division, apparently has been working in violation of federal law for more than a year and a half.

That may render all of the official actions she has taken during that period—lawsuits, demand letters, hires, you name it—“void” and of no effect.

To deter presidents from trying to get around the Senate’s constitutional “advise and consent” role in executive branch appointments, Congress passed the Federal Vacancies Reform Act in 1998. A key section of the law sets restrictions and time limitations on how long someone can remain as the “acting” official in a position that must be confirmed by the Senate.

The assistant attorney general for Civil Rights is one such position, according to the “Plum Book,” the official list of all such positions in the executive branch that is published by the U.S. House of Representatives Committee on Oversight and Government Reform.

Under the Federal Vacancies Reform Act, when an office that requires Senate confirmation becomes vacant, “the first assistant to the office of such officer shall perform the functions and duties of the office temporarily in an acting capacity subject to the time limitations of section 3346.” The time limitation set by that section is 210 days.

The law stipulates that, if the president submits a nomination to the Senate, the 210-day limit can be extended as long as the nomination is pending in the Senate. But it also stipulates that if an acting officer violates this time limitation, all actions taken by that individual “shall have no force or effect.”

Why is this important? Because Obama never actually nominated Gupta to be the assistant attorney general for Civil Rights, nor did he ever recess appoint her into the job.

The “principal deputy” position she holds is the No. 2 position in the division—the equivalent of the “first assistant” position specified in the Federal Vacancies Reform Act.

An Aug. 7, 2001, opinion (25 Op. O.L.C. 177 (2001)) by the Justice Department’s Office of Legal Counsel confirmed this interpretation. It states that the principal deputy—“a term of art that refers to the top deputy of a presidentially-appointed, Senate-confirmed officer”—qualifies as the “first assistant” for purposes of the Federal Vacancies Reform Act.

Obama never formally nominated anyone to fill this post after Gupta was appointed. Consequently, Gupta has remained the designated acting assistant attorney general since that designation was made on Oct. 15, 2014. That means her 210 days of being able to hold the acting position expired on May 13, 2015, 18 months ago.

Under DOJ regulations (28 CFR §0.50), enforcement of “all federal statutes affecting civil rights, including those pertaining to elections and voting, public accommodations, public facilities, school desegregation, employment, … housing, abortion, … and authorization of litigation in such enforcement” is “assigned to … the assistant attorney general, Civil Rights Division.”

Thus, it is the assistant attorney general who has the authority to enforce the law—not any of the subordinate staff within the Civil Rights Division.

Gupta has been very careful to sign court documents—such as the city of Ferguson, Missouri, consent decree—only as the “principal deputy.” But that does not change the fact that she was officially named as the “acting assistant attorney general.” Such tactics don’t get her around the limitations in the Federal Vacancies Reform Act.

It calls into question the validity of all lawsuits initiated by the division that she authorized; any pleadings filed with the federal courts such as the consent decree with Ferguson that she signed in March 2016 or in DOJ’s litigation against voter ID laws in North Carolina and Texas; any hires she may have approved; and any other actions taken by the division that require the approval and authorization of an assistant attorney general who has been confirmed by the Senate.

In that case, the D.C. Circuit determined that Lafe Solomon, the former acting general counsel of the National Labor Relations Board, had served in violation of the act. Therefore, the “unfair labor practice (ULP) complaint issued against [SW General] was unauthorized.” As the court said, the Federal Vacancies Reform Act “renders any action taken in violation of the statute void ab initio.”

Interestingly enough, the court pointed out that it was a prior president’s similar abuse of the “advise and consent” requirement for the head of the Civil Rights Division that was one of the reasons that Congress amended the original vacancies act: “The president’s appointment of Bill Lann Lee to be acting attorney general of Civil Rights in 1997, prompted congressional action.” The Obama administration appears to be repeating that abusive behavior.

As a result of the SW General decision, the inspector general of the Office of Personnel Management, Patrick E. McFarland, sent a memorandum to Beth Cobert, the acting director of OPM, notifying her that the Federal Vacancies Reform Act, as decided by the D.C. Circuit in SW General, prohibited her from serving as the acting director.

He warned that any actions taken by her since Nov. 10, 2015, were “void and may not be subsequently ratified.” No such notice based on the SW General decision has been sent to Gupta by the Justice Department’s inspector general, Michael Horowitz.

The Supreme Court is now reviewing the SW General case. Oral argument was held Nov. 7. But the issue in that case—whether a specific limitation in the law applies to someone who is both the acting officer and the president’s nominee—is obviously not an issue regarding Gupta’s situation.

The bottom line is that the Obama administration appears to have blatantly violated the Federal Vacancies Reform Act precisely because it didn’t want to comply with the confirmation requirement for Gupta. It has treated her as the head of the Civil Rights Division from the very first day she was hired and officially named as the acting assistant attorney general.

This defies the Senate, the Constitution ,and federal law. States, towns, businesses, schools, and police officers who have been targeted by Gupta’s Civil Rights Division should realize that they may have a valid defense under the Federal Vacancies Reform Act against any actions taken against them by the division while Gupta has been the acting assistant attorney general.