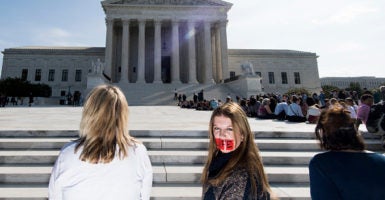 Pro-life protesters, with red tape over their mouths, stand in silent protest on the first day of the new session of the U.S. Supreme Court on Oct. 7. (Photo: Bill Clark/CQ-Roll Call/Getty Images)

Perhaps encouraged by Democratic senators in August warning the Supreme Court to “heal” itself or face restructuring, one progressive group has doubled down on advocating court-packing, while another liberal group this week released a “Supreme Court shortlist” of 32 prospective judicial nominees for a future Democratic president, filled mostly with activists but only a few judges.

It would appear that the left is increasingly focused on the Supreme Court, and many of the groups expressed annoyance that the 2020 Democratic presidential candidates—one of whom could be in a position to fill the next high court vacancy—have had little to say on the topic.

Progressive groups Take Back the Court, Demand Justice, the Committee for a Fair Judiciary, the American Constitution Society, Women’s March, and Indivisible recently called on the news media to ask the 2020 presidential candidates about the Supreme Court.

Take Back the Court wants to expand the number of judges on the Supreme Court, asserting that Senate Majority Leader Mitch McConnell, R-Ky., illegitimately rigged the court in favor of President Donald Trump.

“Expanding the court is the only way to restore credibility to the court,” Aaron Belkin, director of Take Back the Court, told The Daily Signal. “What Mitch McConnell did was very, very damaging to democracy.”

That was a reference to 2016, after the death of conservative Supreme Court Justice Antonin Scalia, when McConnell blocked Senate consideration of then-President Barack Obama’s nomination of federal appeals court Judge Merrick Garland to serve on the Supreme Court, pending the outcome of that year’s presidential election. That made it possible for Trump to fill the vacancy in 2017 with Justice Neil Gorsuch.

Belkin said there’s no such thing as an “objective” court and that it’s healthy for the public to know about a political dimension to justice.

Although he wants to expand the number of justices on the Supreme Court beyond the current nine, he doesn’t know how many more justices there should be.

“That would depend in part on how many justices President Trump seats, since President Trump acquired the presidency illegitimately,” Belkin said. “It is not possible to know at this point how many more. But, since Mitch McConnell stole the court, this is the only means to restore credibility.”

A Quinnipiac University poll found a majority of Americans thought the Supreme Court was too political and favored the court being “restructured” in an unspecified way to mitigate the politics.

In an August brief filed in a Supreme Court gun rights case, Democratic Sens. Sheldon Whitehouse of Rhode Island, Mazie Hirono of Hawaii, Richard Blumenthal of Connecticut, Dick Durbin of Illinois, and Kirsten Gillibrand of New York issued a thinly veiled warning to the court not to rule against their side, and cited the poll.

“The Supreme Court is not well. And the people know it,” the senators’ brief said. “Perhaps the Court can heal itself before the public demands it be ‘restructured in order to reduce the influence of politics.’ Particularly on the urgent issue of gun control, a nation desperately needs it to heal.”

Even liberal Justice Ruth Bader Ginsburg seemed uncomfortable with the idea, telling National Public Radio in July: “Nine seems to be a good number. It’s been that way for a long time. I think it was a bad idea when President Franklin Roosevelt tried to pack the court.”

Annoyed that the high court had invalidated many of his New Deal proposals, Roosevelt in 1937 attempted to pack the Supreme Court, seeking to add a new justice for every justice over the age of 70 at the time. His fellow Democrats held an overwhelming majority in Congress at the time, but they nevertheless shot down the proposal, which the public largely saw as a power grab.

As such, the threat from senators and concomitant push from advocacy groups to restructure the Supreme Court could be more about getting the court to bend, said Carrie Severino, chief counsel at the Judicial Crisis Network, a conservative legal group.

“Intimidation is what they are banking on,” Severino told The Daily Signal. “I hope they are unsuccessful.”

Meanwhile, on Tuesday, Demand Justice, a progressive legal group, released a “shortlist” with the names of 32 people who the next Democratic president could name to the Supreme Court. Only eight of those on the list are currently judges.

“The fact that the Senate, under Mitch McConnell, has invoked the nuclear option for Supreme Court nominees should give the next Democratic president a freer hand to nominate bold progressives like the ones on our list,” the Demand Justice website says of the list. “In the past, Democratic presidents were bound by the need for 60 votes, leading them to look for safer picks who could draw Republican support.

“If Democrats win back the Senate and are able to confirm a pick with just a simple majority, there is all the less reason to confine ourselves to those more traditional types of nominees.”

Demand Justice did not respond to inquiries for this article. The organization is run by Brian Fallon, the national press secretary to Hillary Clinton’s 2016 presidential campaign.

The list appears designed to transform the Constitution, Severino  said.

“These suggested justices are very far left. This group is too extreme to accept Obama appointees,” Severino told The Daily Signal. “Only four [Obama judicial appointees] made the list. The people on this list mostly devoted their life to activism. They seem to have one person for every special-interest constituency, the abortion-on-demand constituency, the anti-Second Amendment constituency, and the anti-border constituency.”

The list is intended to counter a list of potential Supreme Court nominees that then-candidate Trump released in 2016 that was based in part on suggestions from conservative groups, such as the Federalist Society and The Heritage Foundation.

The list is interesting, but for now at least, irrelevant, said Thomas Jipping, deputy director for the Meese Center for Legal and Judicial Studies at Heritage.

“Demand Justice is on the left fringe of the Democratic base. They are still screaming for the impeachment of Justice Kavanaugh. They have also stated that Trump should not appoint any lawyer from a big law firm,” Jipping told The Daily Signal.

Jipping noted that Take Back the Court and Demand Justice are aligned with other groups on the left determined to remake the judiciary, such as People for the American Way, the Alliance for Justice, and the Leadership Conference on Civil and Human Rights.

“The left doesn’t want judges. They want left-wing activists in robes who will crusade from the bench,” Jipping said. “Obama appointed 326 judges. They couldn’t come up with more than four? Even Obama judges are too moderate for this group.”

The group’s website doesn’t directly explain why so few Obama judges are on its list. However, it does say, “our list boasts a wide range of former public defenders, public interest lawyers, academics, and plaintiff’s lawyers.”

The judges that are on the Demand Justice shortlist are California Supreme Court Justices Goodwin Liu, Mariano-Florentino Cuellar, and Leondra Kruger; North Carolina Supreme Court Justice Anita Earls; Judge Richard Boulware II of the U.S. District Court of Nevada; Judge Jane Kelly of the 8th U.S. Circuit Court of Appeals; Judge Cornelia Pillard of the U.S. Circuit Court of Appeals for the District of Columbia; and Judge Carlton Reeves of the U.S. District Court for the Southern District of Mississippi.

The judges, as well as the California attorney general, are legitimate candidates for the high court, said Curt Levey, president of the Committee for Justice, a conservative legal group. Otherwise, he said, it’s largely just a wish list.

“The Trump list [for potential Supreme Court nominees] were of people notable in the conservative legal community,” Levey said. “This list seems largely based on any lawyer who has litigated against the Trump administration.”