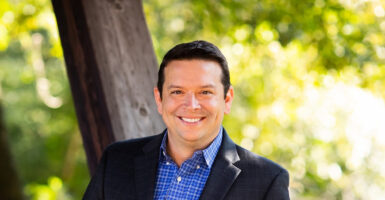 As critical race theory continues to attract national attention, one Georgia lawmaker is trying to pass legislation to ensure it stays out of the Peach State’s schools.

On Jan. 14, Georgia state Rep. Brad Thomas introduced a bill to ban concepts like critical race theory and The New York Times’ 1619 Project from being taught in schools.

“The legislation in and of itself is just to make sure that we’re not teaching divisive ideology to our children,” Thomas said in an interview with The Daily Signal. “We want every child, regardless of how they look or their physical appearance, to know that they have access to the American dream. And the problem is that [critical race theory] in and of itself teaches exactly the opposite.”

The Heritage Foundation defines critical race theory as an ideology that makes race the prism through which its proponents analyze all aspects of American life, categorizing individuals into groups of white oppressors and nearly everyone else who is nonwhite as oppressed victims. Proponents of critical race theory believe America and its institutions are systemically racist, created to benefit white people at the expense of all others.

Education has become the most visible battleground where the left is fighting to influence the future of the country. And while leftist activists and teachers unions continue to insist that critical race theory is not being taught in K-12 schools, they bristle when bills specifically targeting the ideology are introduced.

On Jan. 28, The Heritage Foundation’s sister organization, Heritage Action for America, discovered that the Gwinnett County Public School District, one of the largest districts in Georgia, had quietly deleted the syllabus for an Advanced Placement language class from its website. The syllabus showed that the class would use critical race theory in its curriculum, as well as Marxist and feminist theory.

And even when they aren’t clandestinely removing references to critical race theory, some schools make it exceedingly difficult for parents and others to obtain information about their curricula to verify what is being taught.

But most insidiously of all, the left will try to claim that justified concerns over critical race theory are an attempt to whitewash history. They say that conservatives are trying to prevent schools from teaching about slavery, Jim Crow, and other checkered aspects of America’s past.

“We have provisions in the bill and protections in the bill to ensure that our history is taught,” he argues. “We just want it taught in an unbiased and nonpartisan manner.”

For any civilization to survive, it’s crucial that its citizenry view its continued existence as a net positive. That’s not to say America is beyond reproach. There are very clear blights on American history, specifically centered around race.

But the left’s obsession with framing all of American history around its worst aspects makes the country weaker and divides us. Per Gallup polling, the nation’s views on race relations are at massive lows, and only trailing downward.

White children don’t need to be told they’re inheriting the legacy of racists and bigots. They should be told they’re the descendants of flawed people who slowly but surely struggled toward a better future for all Americans. And minority children’s minds shouldn’t be polluted with dangerous notions that they can never achieve the American dream because they will never be allowed to succeed.

That fight to end critical race theory is worth it. As Thomas said in his interview with The Daily Signal, reflecting on his own past: