1619 Project Creator: I Don’t ‘Understand This Idea That Parents Should Decide What’s Being Taught’ in School 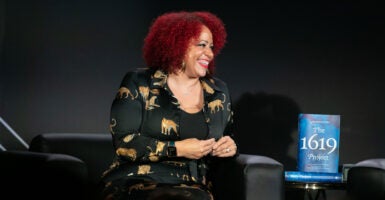 The creator of The New York Times’ 1619 Project said on NBC’s “Meet the Press” on Sunday she doesn’t understand the argument “that parents should decide what’s being taught” to their children in school.

The 1619 Project was created by Nikole Hannah-Jones, a writer for The New York Times, and it promotes the idea that America’s “true founding” occurred when slaves arrived in the Colonies, framing the history of the country around race and slavery.

“I don’t really understand this idea that parents should decide what’s being taught,” Hannah-Jones said on “Meet the Press.”

“I’m not a professional educator. I don’t have a degree in social studies or science,” she said.

“We send our children to school because we want them to be taught by people who have an expertise in the subject area, and that is not my job,” Hannah-Jones said.

During a September debate, Democratic Virginia gubernatorial candidate Terry McAuliffe said parents should not make decisions regarding what schools teach their children.

“I’m not gonna let parents come into schools and actually take books out and make their own decisions,” McAuliffe said. “I stopped the bill that I don’t think parents should be telling schools what they should teach.”

McAuliffe, who was seeking a second term, also vetoed a bill that would have required school districts to warn parents about educational materials containing “sexually explicit” content and require teachers to provide replacement instructional materials for any student whose parent requested an alternative.

“When the governor or the candidate said that he didn’t think parents should be deciding what’s being taught in school, he was panned for that, but that’s just the fact,” Hannah-Jones said. “This is why we send our children to school and don’t homeschool, because these are the professional educators, who have the expertise to teach social studies, to teach history, to teach science, to teach literature, and I think we should leave that to the educators.”