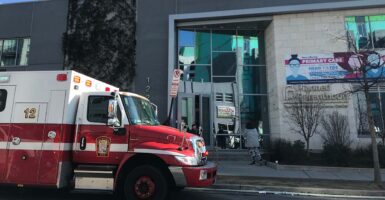 Photos and videos show ambulances outside a D.C. Planned Parenthood clinic Thursday morning, sparking concerns that a woman had medical complications during an abortion. (Photo courtesy of Cassidy Shooltz)

Photos and videos show ambulances parked outside a Planned Parenthood clinic in Washington, D.C., where witnesses say a woman in pain was escorted to an ambulance Thursday morning.

The ambulances apparently were called to aid a patient in distress at Planned Parenthood’s Carol Whitehill Moses Center around 10:30 a.m., eyewitnesses told The Daily Signal.

Neither Planned Parenthood of Metropolitan Washington nor the Moses Center, which is about 3 miles from the White House, responded to The Daily Signal’s requests for comment.

The Moses Center offers abortion pills, in-clinic abortions of unborn babies up to 19 weeks old, and referrals for other abortions, according to the clinic’s website.

“If your last period was after 19 weeks and 6 days, we can still help,” the website says. “Call us for a referral list of health care providers in your area that offer other abortion services.”

A spokesman for the D.C. Fire and Emergency Medical Services Department confirmed to The Daily Signal that a medical call was made from the Planned Parenthood clinic in the same time frame described by the eyewitnesses. But the spokesman would not comment further.

Two women at the scene told The Daily Signal that originally only one ambulance was at the clinic Thursday morning, but a second one arrived shortly after, apparently called as backup.

Paramedics helped escort a young woman out of the clinic at 1225 4th St. NE before rushing her to the hospital, the women said.

“A woman walked out and she was wearing a black coat, she looked painful and fearful and she was walking uncomfortably and got into the ambulance,” said Cassidy Shooltz, a pro-life advocate who counsels women going into abortion clinics against having the procedure.

“You could see Planned Parenthood staff around her. And once she got into the ambulance, they closed the doors and they sat there for a little while, about five minutes, and then they drove away,” Shooltz said. “They used the sirens, so she was not in good condition and they had to get to the ER very quickly.”

Lauren Handy, another eyewitness with a pro-life group called the Progressive Anti-Abortion Uprising, said she believes that the clinic messed up an abortion procedure.

“Today’s a later abortion day, so past 12 weeks and up to 20 weeks abortions are performed today, on Thursdays,” Handy told The Daily Signal. “Obviously, the later you are in pregnancy, the higher risk there is of complications.”

Handy said that two patients who came to the clinic during the incident Thursday morning apparently chose instead to leave when they saw the ambulances on-site.

“Two people who were going in for abortions today, they left; they didn’t get the abortions,” Handy said. “My guess is that this incident scared them.”

A Moses Center employee declined to comment on the matter to The Daily Signal and hung up the phone before a reporter could ask more questions.

Another employee of the Planned Parenthood clinic shut the door of the facility when a Daily Signal reporter attempted to inquire about the incident.