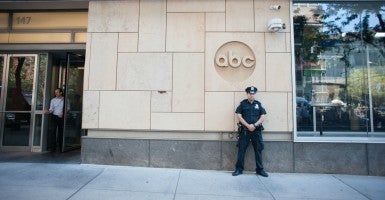 A new analysis by the Media Research Center claims ABC, NBC and CBS have not reported on the Center for Medical Progress’ undercover videos in one month. (Photo: JB Nicholas/Splash News/Newscom)

Three major broadcast networks have not reported on the Center for Medical Progress’s undercover videos in one month, according to an analysis conducted by the Media Research Center.

Following the release of the videos, Planned Parenthood faces allegations that it is engaged in the sale of aborted fetal body parts. The organization also faces several state and congressional investigations.

The Center for Medical Progress released a new undercover video on Tuesday of a conversation actors portraying potential buyers from a human biologics company had with Perrin Larton, the procurement manager for Advanced Bioscience Resources, a company that procures fetal organs from Planned Parenthood clinics.

According to Yoder’s study, the most recent report on one of the three networks occurred on CBS on July 31, when the release of the fourth undercover video was briefly discussed.

The last time NBC reported on one of the videos was July 30, the day before CBS reported on the subject.

ABC last reported on the videos on July 16, two days after the release of the first video featuring Planned Parenthood Federation of America’s senior director of medical services, Dr. Deborah Nucatola, on July 14.

Yoder added that the lack of additional reporting means “the networks have still only played 1 minute and 13 seconds of footage from these videos on air.”

The Daily Signal previously reported on a Media Research Center study showing how little time CBS, NBC, and ABC had devoted to covering the Center for Medical Progress’s videos.

The networks showed no graphic footage of fetal body parts during their coverage, although two of the videos depict Planned Parenthood staffers dissecting aborted fetal remains.

Spokespersons for CBS, NBC, and ABC did not immediately return The Daily Signal’s request for comment.

The Center for Medical Progress has released a series of undercover videos depicting Planned Parenthood and StemExpress officials discussing the sale of fetal body parts at the organization’s affiliates.

Profiting from the sale of fetal human organs is a felony in the United States.