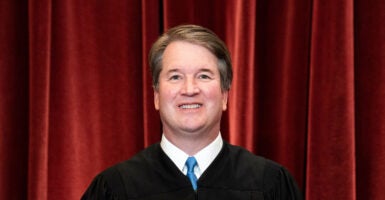 The time allotted for each side was extended so that newly appointed U.S. Solicitor General Elizabeth Prelogar could participate and include the Biden administration’s opposition to laws protecting unborn children.

Most of the time for arguments was spent on whether the court’s decisions in Roe v. Wade and Planned Parenthood v. Casey should be overruled.

The validity of those precedents is on the line because the court in both decisions determined that any abortion ban prior to “viability” (when the unborn child can potentially live outside the womb) is unconstitutional. The Mississippi ban draws the line well before viability, generally understood to be at about 24 weeks.

A paper we published recently described three possible outcomes: The court upholds Mississippi’s abortion ban by overruling Roe and Casey; the justices reach the same result by narrowing or modifying—rather than overruling—those precedents; or the court strikes down the Mississippi ban by reaffirming Roe and Casey.

While predicting the final result based on oral arguments can be risky, both sides today poured cold water on the second option. They rejected as unworkable any “half measures” that would substitute something else for the Roe-Casey standard.

In other words, they argued, Roe and Casey must either stay or go.

The court has established a two-step process for determining whether a precedent should be overruled.

The first step is whether that precedent was wrongly decided. On that, Mississippi Solicitor General Scott Stewart’s opening words were that Roe and Casey “haunt our country” and have no foundation in the text, structure, or history of the Constitution.

Significantly, neither Julie Rikelman, the attorney for the abortion clinic challenging the law, nor Prelogar made much of an attempt to defend either case on its merits.

The second question is whether a wrongly decided precedent should be overruled, and the court has identified several factors or criteria to help answer that question. Justice Stephen Breyer argued that the court should be “more unwilling” to overrule what he called “watershed” precedents, so that the public does not think the justices are simply responding to political pressure.

He might have been implicitly conceding that Roe and Casey could not survive application of the court’s traditional analysis. And, as Chief Justice John Roberts observed, Breyer’s position actually suggests that the more egregiously wrong a precedent is, the more the court should resist overruling it.

Justice Brett Kavanaugh explained that some of the court’s most significant decisions had themselves overruled precedents, citing an extensive list of decisions that included Miranda v. Arizona, Lawrence v. Texas, and Obergefell v. Hodges.

His citations also included Brown v. Board of Education, which effectively overruled the “separate but equal” principle established in Plessy v. Ferguson.

If the court had simply refused to reconsider its precedents, Kavanaugh said, “this country would be a much different place.” He added that “if we think that the prior precedents are seriously wrong … why then doesn’t the history of this court’s practice with respect to those cases tell us that the right answer is actually a return to the position of neutrality … and not stick with those precedents in the same way all the other cases didn’t?”

Several justices asked whether legal or other circumstances have changed since Casey, which was decided in 1992. Justice Amy Coney Barrett noted that states now have “safe haven” laws that allow mothers to relinquish newborn babies to hospitals or other designated safe havens without criminal prosecution within a few days of delivery instead of abandoning them.

Barrett suggested that, by separating pregnancy from parenthood, safe haven laws may diminish what the Supreme Court in Roe called the “detriment” facing women of carrying an unwanted pregnancy to term.

Barrett also asked whether upholding the Mississippi abortion ban would necessarily raise questions about the validity of other Supreme Court precedents.

Stewart responded that none of the precedents involving private or personal decisions involved “the purposeful termination of a human life.” In fact, even Roe v. Wade itself acknowledged that the presence of the unborn child makes abortion “inherently different” from other privacy rights.

In perhaps the most shocking line of questioning, Justice Sonia Sotomayor tried to argue that it is impossible to know if an unborn child’s reaction to physical stimuli shows that he or she feels pain. Sotomayor  claimed that with “about 40% of dead people who, if you touch their feet, the foot will recoil. There are spontaneous acts by dead-brain people. So, I don’t think that a response to, by a fetus, necessarily proves that there’s a sensation of pain or that there’s consciousness.”

She might have been unaware of the current research on the subject, which shows that unborn children may indeed feel pain at as early as 12 weeks.

The most important question in this case concerns the proper setting for all of these questions, debates, issues, values, and arguments: Is it the legislature or the judiciary?

Unless the Constitution clearly says otherwise, the answer is clear. The American people and their elected representatives have authority to wrestle with these matters and decide on the answers.

When the Supreme Court takes them away from the people without authorization from the Constitution, the court undermines its own credibility and legitimacy.

Sotomayor asked a question about the current case that actually applies best to Roe and Casey: How can the Supreme Court “survive the stench that this creates in the public perception that the Constitution and its reading are just political acts”?

The answer is, how can the high court survive without overruling Roe and Casey—decisions that divined a constitutional right to abortion very nearly out of thin air?

The court must correct its grave constitutional error and overrule Roe and Casey so that Americans can govern themselves on matters of abortion.

Editor’s note: This article has been edited to restore a word omitted in one of Justice Sonia Sotomayor’s quotes.