Coverage of Steele Dossier Is a Dark Period for American Media 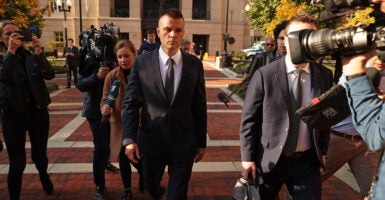 Despite the fact that the Steele dossier, which alleged potential ties between the 2016 Trump campaign and Russia, has been totally discredited, the media outlets that promoted its lies have yet to admit their role in spreading misinformation. Pictured: Igor Danchenko departs the Albert V. Bryan U.S. Courthouse after being arraigned on Nov. 10 in Alexandria, Virginia. Danchenko has been charged with five counts of making false statements to the FBI regarding the sources of the information he gave the British firm that created the Steele dossier. (Photo: Chip Somodevilla/Getty Images)

In a Gallup poll released in October, just 36% said they have a “great deal” or a “fair amount” of trust in the media, which is the second-lowest approval number since the organization began recording these particular opinions in 1972.

Interestingly, the only time the media were held in lower esteem, according to Gallup, was in 2016, just before Donald Trump was elected president.

One doesn’t have to look any further than the notorious “Steele dossier” to figure out what’s been going wrong with the corporate media.

The dossier, first posted to the internet in full by the website BuzzFeed on Jan. 10, 2017—10 days before Trump took office—fueled the media frenzy over alleged collusion between the 2016 Trump campaign and Russians bent on influencing the election.

We now know that the dossier, with most of its contents debunked and other portions never substantiated, was commissioned by Hillary Clinton’s campaign and compiled by former British spy Christopher Steele, who used Russian citizen Igor Danchenko as a source. Earlier this month, Danchenko was arrested and charged with five counts of lying to the FBI.

The dossier of lies was used by the FBI to obtain warrants under the Foreign Intelligence Surveillance Act to spy on Trump’s campaign.

For what it’s worth, disgraced former FBI Deputy Director Andrew McCabe said last year that he would not have signed a secret Foreign Intelligence Surveillance Act warrant application if he had known about the problems with the dossier.

Nevertheless, the dossier and the media hysteria it created undermined the new president even before he took office, and it lasted for more than two years.

It wasn’t until the April 2019 release of the report by special counsel Robert Mueller that the country learned that there was no evidence of coordination or collusion between the Trump campaign and Russian interests.

With the arrest of Danchenko, volumes of reporting by major news organizations have been rendered irredeemably flawed.

So, now would be the time for the news media to issue their own mass “oops,” and to set the record straight about the details they published from the now-discredited Steele dossier.

Only, they don’t seem to be in a rush to do so.

McClatchy, owner of more than two dozen newspapers, has yet to retract its erroneous story that Michael Cohen, then a lawyer for Trump, traveled to Prague to meet with Kremlin agents. He did not.

CNN was one of the leaders in hyperventilation over the contents of the dossier and, naturally, gave the Danchenko arrest scant coverage by comparison.

At one point, CNN’s Alisyn Camerota seemed to endorse the entirety of the dossier, saying to Rep. Jim Jordan, R-Ohio, “Your intel community has corroborated all the details.”

Needless to say, CNN is not exactly burning up the airwaves with corrections or retractions of its early reporting.

But the blame can be spread far and wide.

On MSNBC, Rachel Maddow clung to the thin reassurance for her leftist audience that nothing in the dossier had been “disproven,” which is an embarrassingly low standard for a supposed news network. Television anchors should report what they know, not what they hope to be true.

Also on MSNBC, Nicole Wallace said of the dossier, “It may be dirty, but it ain’t fake.” She repeated the weak argument that nothing was “disproven,” as though it’s perfectly acceptable to report claims that haven’t been verified.

For some journalists, the Steele dossier paid dividends, bogus or not.

At the pinnacle of the journalistic mania were The New York Times and The Washington Post, which shared the 2018 Pulitzer Prize for National Reporting for their work on the Trump-Russia story. For his part, Trump has called for the award to be rescinded. As of this writing, it has not.

And Ben Smith, who as editor of BuzzFeed made the decision to post the dossier in the first place in January 2017, has moved up the journalism ladder and is now a columnist for the New York Times.

CNN reporter Natasha Bertrand, then with Business Insider, parlayed her embrace of the dossier into a contributor contract with MSNBC and boosted her career.

Axios, which had its own problematic reporting on the dossier, has weighed in on the entire fiasco, writing, “It’s one of the most egregious journalistic errors in modern history, and the media’s response to its own mistakes has so far been tepid.”

The Washington Post, to its moderate credit, has corrected and removed parts of two articles from 2017 and 2019, admitting that it “can no longer stand by the accuracy” of large parts of the reports.

But largely, the national news media simply dutifully reported the Danchenko arrest, perhaps mentioning the damage inflicted on the veracity of the dossier itself, and simply moved on.

The Steele dossier was a story that bludgeoned its way into the national consciousness for more than the first half of Trump’s term in office. The media gleefully reported its contents—even some of the more salacious items—and passed them off as fact.

The constant firestorm hindered and distracted the administration as it battled the fake narrative, which a cynical observer might conclude was the media’s intent.

There is massive collective guilt to be borne for dragging the entire country through a prolonged episode that was almost entirely based on one central lie.

News outlets that reported details from the dossier—which could never be proven true because they were false at the outset—should closely and publicly examine their editorial practices and decision-making processes.

And they should all run banner headlines and lead stories that proclaim, “We got it wrong.”

Offering a casual shrug and carrying on as usual only compounds the problem: Americans don’t trust the media. And there are very good reasons for that.