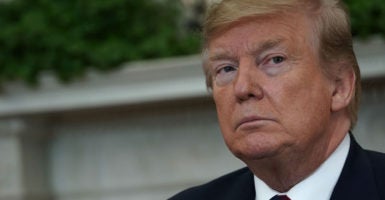 The second half of the nearly 450-page Mueller report confirms that there was no obstruction of justice by President Donald Trump. (Photo: Alex Wong/Getty Images)

The report by special counsel Robert Mueller released Thursday by Attorney General William Barr confirms that Barr was completely accurate when he told Congress in March that Mueller found no evidence of collusion or coordination between the Trump election campaign and Russian officials.

The second half of the nearly 450-page report also confirms Barr’s legal conclusion that there was no obstruction of justice by President Donald Trump.

Portions of the report have been redacted to protect the confidentiality of grand jury material, ongoing prosecutions, and national security. But these redactions affect only a relatively small part of the overall report.

Even with these redactions, the report makes it clear that no Americans—including no one in the Trump campaign—cooperated, coordinated, or colluded with Moscow’s attempts to influence our 2016 election.

It is also evident that—despite his anger and frustration at what he perceived to be a politically motivated investigation—the president took no actions that actually obstructed the Mueller investigation.

Internal White House conversations and meetings described in the Mueller report make the extent of the president’s anger clear. He was innocent of the accusations being made and “thought the Russia story was developed to undermine the legitimacy of his election,” according to the report.

The inaccurate reporting of the collusion claims for two years by some in the media—and the Hillary Clinton campaign’s involvement with the Steele dossier that helped instigate the investigation—make the president’s indignation appear fully justified.

Trump wanted Mueller fired—not because the president wanted to obstruct or undermine an investigation, but because he knew there was nothing to investigate. In the end, however, he let the pointless exercise continue.

It would be very difficult to make an obstruction charge out of actions that were simply discussed but never implemented—particularly when there seems to be no corrupt motive involved, such as an intent to cover up an actual crime.

In his news conference Thursday, Barr made a number of important points that must be kept in mind when reviewing this report and Barr’s conclusion that no obstruction of justice occurred.

First, Barr said Trump placed no restrictions or limitations on Mueller or anyone else at the Justice Department. Mueller was given complete authority and all of the resources and money he needed to do a wide-ranging, comprehensive investigation.

Second, Mueller got complete access to look at all of the information, documents, and witnesses needed to thoroughly investigate the collusion and obstruction of justice claims.

Even though he could have, Trump did not assert executive privilege. The president also gave the special counsel full access to White House staff, including White House counsel Don McGahn, who was interviewed for 30 hours by lawyers working for Mueller.

Some will point out that Mueller did not get to interview Trump. Mueller makes clear in his report that he believes a “criminal investigation during the President’s term is permissible” and that he therefore had the power to subpoena the president.

The fact that Mueller never did subpoena Trump is evidence that Mueller felt he had obtained all the information he needed without a face-to-face interview with the president.

Contrast that with President Barack Obama’s assertion of executive privilege during the congressional probe into Attorney General Eric Holder and Operation Fast and Furious, a botched investigation of gun smuggling from the U.S. into Mexico.

Many consider Fast and Furious to be one of the most reckless law enforcement operations ever carried out by the Justice Department. Yet the Obama White House obstructed a full and thorough investigation by barring access to critical documents and information.

So what do the president’s political opponents make of all this?

Leading Democrats still insist that further investigation is required. Mueller’s investigation involved his own team of 19 lawyers, as well as 40 FBI agents, intelligence analysts, and forensic accountants. It racked up 2,800 subpoenas, 500 search warrants, 230 orders for communication records, 50 orders for pen registers, 13 requests for evidence from foreign governments, and interviews with 500 witnesses.

Are we to believe that this wasn’t enough?

I seriously doubt that the public will support the efforts by Democrats to keep alive a now-failed narrative that claims that when the American people voted to elect Trump president, the Russians made them do it.

Yes, the Mueller report contains many conflicting claims by different people; a lot of speculation and assumptions that have not been proven in a court of law; and a great deal of discussion of legal issues like the applicability of obstruction of justice statutes to a president in the exercise of his constitutional authority and powers.

But let’s focus on the bottom line.

Mueller’s “investigation did not establish that members of the Trump Campaign conspired or coordinated with the Russian government in its election interference activities,” the Mueller report found.

Moreover, the report concluded that “the evidence does not establish that the President was involved in an underlying crime related to Russian election interference.”

In addition, there is ample support in the second half of the Mueller report for Barr’s conclusion, in consultation with other senior Justice Department officials, that the evidence developed by Mueller “is not sufficient to establish that the President committed an obstruction-of-justice” offense.

Some Democrats dream that if the House of Representatives brings in Mueller to testify, he will produce some kind of “smoking gun” withheld from the report.

They will be disappointed. And they will have wasted even more of our time and taxpayer money in what will be hard to see as anything other than a partisan witch hunt.

Enough is enough. It is time for Congress to get on with dealing with the real problems facing our country.