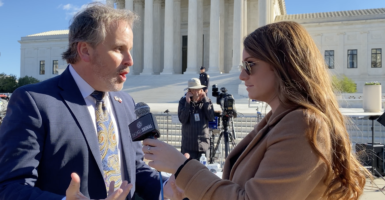 “When there is a heartbeat the doctor can detect, the doctor cannot take that life in an abortion," says Bryan Hughes, the Texas state senator who authored the Heartbeat Act, in discussing what sets his legislation apart in an interview Monday with The Daily Signal’s Mary Margaret Olohan outside the U.S. Supreme Court. (Photo: The Daily Signal)

Texas state Sen. Bryan Hughes, author of one of the most controversial pieces of abortion legislation in decades, insisted Monday that his law is focused on protecting every “little baby” with a heartbeat.

The Texas Republican stood steps away from the Supreme Court building as the nine justices heard oral arguments in challenges to Texas’ Heartbeat Act.

“This law is about human life, a little baby growing inside her mother’s womb,” Hughes told The Daily Signal in an interview. “When there is a heartbeat the doctor can detect, the doctor cannot take that life in an abortion. That’s all the bill is about.”

Texas’ Heartbeat Act, or SB8, has particularly angered pro-abortion media, activists, and lawmakers, as it allows private citzens to sue anyone who “knowingly engages in conduct that aids or abets the performance or inducement of an abortion.”

The law also states that anyone who sues over an abortion of an unborn baby with heartbeat in Texas may be awarded $10,000 “for each abortion” performed, induced, aided, or abetted.

An unborn baby’s heart begins beating at about 6 weeks.

Hughes, 52, whose district east of Dallas includes Tyler, said that Texas lawmakers passed the Heartbeat Act in a way that it would immediately take effect and “begin saving lives.”

“Since Sept. 1, it has been in effect,” Hughes said of the law. “And now in Texas, abortion doctors are not doing abortions of little babies if they have a heartbeat.”

“Other state heartbeat laws rely on the government to enforce them,” the state senator explained. “But you may have seen [that] last year, dozens of district attorneys around the country publicly stated, ‘We will not enforce pro-life laws.’ So if the government won’t enforce the law, the people of Texas will.”

“So we took this long-standing legal principle and applied it here so that the people can enforce the law,” he said. “So if a doctor does an abortion on a little baby with a heartbeat in Texas, any person can bring suit against that doctor to hold him accountable for taking that life. That’s how this bill works.”

If a nurse working in an abortion clinic knew that a doctor knowingly had aborted a baby with a heartbeat, or if the doctor had failed to check for a heartbeat and performed an abortion, that nurse could sue, Hughes said.

“It would have to be knowledge that the abortion is being done on a baby with a heartbeat—so only people with knowledge of that,” he said.

Media and activists have wildly misinterpreted the law, the Texas state senator continued, referring to the commonly cited example of an Uber driver.

“People talk about the Uber driver,” he said. “It’s kind of like robbing the bank: If the bank robber takes Uber to the bank and the Uber driver knows he’s the getaway driver, then he’s aiding and abetting. If he doesn’t know, he’s not aiding and abetting. The same logic applies here. It requires knowledge and intent to do an abortion on a little baby with a heartbeat.”

Hughes said he was confident that the Supreme Court would follow the law, leaving Texas’ Heartbeat Act intact.

“This Texas law is on strong legal ground, based on the Constitution, based on federal statute, federal common law, court decisions,” he said. “We believe the Supreme Court will follow the law and will leave this law in place and let Texas continue to protect innocent human life.”