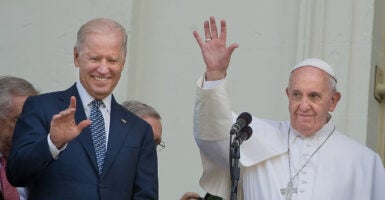 A Catholic American president traveled to Rome on Friday to meet with Pope Francis. There is a very profound and obvious issue they could discuss: Is it OK for a politician of any religious faith, or even none at all, to violate the natural law and support the deliberate killing of unborn babies?

President Joe Biden unambiguously supports legalized abortion and forcing taxpayers to pay for it. That puts him at odds not just with his church but with the founding principle of his country.

“We hold these truths to be self-evident,” says the Declaration of Independence, “that all men are created equal, that they are endowed by their Creator with certain unalienable Rights, that among these are Life, Liberty and the pursuit of Happiness.”

Charles Carroll of Maryland was the only Catholic signer of this declaration. But all the other signers, regardless of their religious affiliation, agreed on this point: The right to life comes from God. In the first paragraph of the Declaration of Independence, they jointly invoked “the laws of Nature and Nature’s God.”

In recent days, as this column noted last week, Pope Francis has unambiguously reiterated the teaching of the Catholic Church that abortion is murder.

The pope addressed the evil of abortion on Sept. 15, during a press conference he held on a flight from Slovakia to Rome. “It’s more than a problem, it’s homicide, whoever has an abortion, kills,” the pope said.

That is what Biden has done in the United States by advocating legalized abortion. He “accepts daily murder.”

The pope then addressed the Pontifical Academy for Life at the Vatican on Sept. 27. “There is the throwing away of children that we do not want to welcome, with that abortion law that sends them back to their sender and kills them,” the pope said in that talk. “Today this has become a ‘normal’ thing, a habit that is very bad; it is truly murder,” said the pope.

What is Biden’s position on what the Catholic Church, as expressed by Pope Francis, holds to be murder?

During his 2020 campaign, Biden not only promised that he would “codify Roe v. Wade,” the 1973 Supreme Court decision that declared abortion a right, but also that he supported “repealing the Hyde Amendment,” which prohibits federal funding of most abortions.

“Biden will work to codify Roe v. Wade, and his Justice Department will do everything in its power to stop the rash of state laws that so blatantly violate Roe v. Wade,” Biden’s campaign website said, as this column has reported before.

“Vice President Biden supports repealing the Hyde Amendment because health care is a right that should not be dependent on one’s zip code or income,” said his campaign website.

Biden not only wants to force Americans to live in a country where it is deemed a “right” to kill an unborn child but he also wants to force taxpayers, including his fellow Catholics, to pay for the killing of unborn children. Or, as Pope Francis might put it, he wants taxpayers to pay for an act that is “truly murder.”

In the last 10 years on record (2009 to 2018), according to the reports that 47 states submitted to the Centers for Disease Control and Prevention, there were 6,795,416 unborn babies aborted in this country. The full number cannot be known because California, Maryland and New Hampshire did not report their abortions to the CDC during those 10 years. (Additionally, the District of Columbia did not report its abortions for 2016.) Yet, even with our most populous state not reporting its abortion numbers, there were 619,591 unborn American babies in 2018 alone who, as Pope Francis would put it, were “truly murdered.”

Is this something that Pope Francis should discuss with Biden when they meet on Friday? Should the pope tell Biden to change his position on abortion now and stop advocating for the extermination of unborn babies and instead defend their God-given right to life?