Educating Students About Victims of Communism 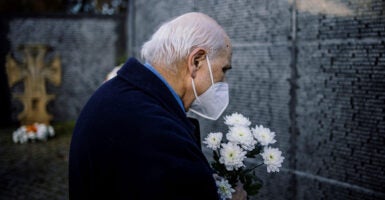 The Victims of Communism Memorial Foundation highlights communism’s devastating record and the continuing threat it poses to free government by “telling powerful stories and highlighting examples of communism’s victims,” says Ambassador Andrew Bremberg. Pictured: A man searches for the name of his relative on the monument listing victims of the communist regime during an open air mass in Sofia, Bulgaria, Feb. 1, 2021. (Photo: Dimitar Dilkoff/AFP/Getty Images)

Many Americans today assume that the threat of communism subsided with the fall of the Berlin Wall in 1989, but “we continue to see communist and socialist regimes pop up and spread not only in Latin America—for example, in Venezuela and Nicaragua—but around the world,” says Ambassador Andrew Bremberg, president and CEO of the Victims of Communism Memorial Foundation. “These regimes regularly kill their own citizens and have a devastating effect on human rights and their national economies.”

In fact, over 1.5 billion people—including those living in Laos, North Korea, Vietnam, Cuba, and, of course, China—currently live under oppressive communist and socialist governments.

Founded in 1993 by a bipartisan, unanimous act of Congress, the Victims of Communism Memorial Foundation is “devoted to commemorating the more than 100 million victims of communism around the world and to pursuing the freedom of those still living under totalitarian regimes.”

Before coming to the foundation, Bremberg served as the Trump administration’s representative of the United States to the Office of the United Nations and Other International Organizations in Geneva. During his time there, which he describes as a “profound and life-changing experience,” he “became aware of the challenge of China,” which was “far worse” than he had realized.

He notes that the U.N. Human Rights Council made investigating the United States’ record on racism during the summer of 2020 its highest priority – putting it above China’s appalling human rights violations against Uyghurs, among other ethnic groups within its borders.

“Communist countries by far have the worst record on human rights, past and present,” Bremberg argues. “Their brutality is only outdone by their lies and obfuscations.” Seeing this moral imbalance up close convinced him of the “need to educate Americans about the dangers of communism today.”

American civic education, Bremberg states, entails not only understanding the structure of our form of government, but also the world around us. Pointing to the competing claims of the 1619 Project and the 1776 Commission, he notes that while we should be willing to “be self-critical and examine our past,” we also need to view our nation in comparison to others, especially ones existing under communism’s iron fist.

While Bremberg says the United States has done an excellent job highlighting the horrors of the Holocaust in K-12 education—he recalls the effect that reading Anne Frank’s personal diary has had on generations of students—students’ understanding of communism is weak by comparison.

The Victims of Communism Memorial Foundation spotlights communism’s devastating record and the continuing threat it poses to free government by “telling powerful stories and highlighting examples of communism’s victims.” These stories, he argues, “capture our imaginations, creating deeper connections” that will help students “learn core truths” that will stick with them.