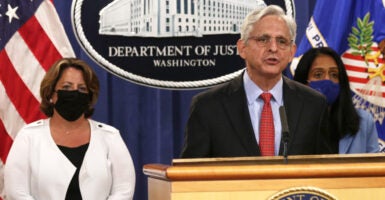 The executive director and CEO of the National School Boards Association has been an aide to a governor and congressman who were Democrats. Pictured: Attorney General Merrick Garland, flanked by deputies, speaks Sept. 9 during a Justice Department press conference. (Photo: Alex Wong/Getty Images)

The National School Boards Association, which urged the Biden administration to use federal law enforcement to investigate parents who speak out on local education matters as potential domestic terrorists, has political ties to the Democratic Party and labor unions.

The national association represents members of locally elected school boards, which usually are officially nonpartisan, and is a federation of state school board associations.

Although most funding for the National School Boards Association comes from state school boards, the National Education Association—the nation’s largest teachers union and a major donor to Democrat candidates—contributed in the past two years.

The teachers union contributed $68,000 to the national association in 2020 and $50,000 in 2019, according to union reports to the Labor Department. Each contribution is a relatively tiny portion of the association’s annual $19.2 million in revenue and $17.2 million in expenses.

Leaders of the National School Boards Association, established in 1949, also have worked for and contributed to Democrat politicians.

Slaven also was Wise’s congressional district director when Wise served in the U.S. House of Representatives. In 2008, he contributed $250 to the unsuccessful House campaign of Talley Sergent, also in West Virginia.

The letter to Horowitz from the foundation, which was formed by former Trump administration officials, said the Biden administration didn’t want “the usual suspects” involved—that is, an outside group that the public traditionally associates with politics:

Upon information and belief, at the express direction of or with the express consent of Jane Doe #1, Jane Doe #2 and other Biden administration officials developed a plan to use a letter from an outside group (‘not the usual suspects’) as pretext for federal action to chill, deter, and discourage parents from exercising their constitutional rights and privileges.

Slaven co-signed the Sept. 29 letter to President Joe Biden with Viola Garcia, president of the National School Boards Association and since 1972 a member of the school board for the Aldine Independent School District in the Houston area.

The Center for Responsive Politics lists someone named Viola Garcia from Houston as contributing $100 to Rep. Sylvia Garcia, D-Texas, in 2013.

Jane Mellow, interim chief advocacy officer for the National School Boards Association, worked for 15 years on Capitol Hill, both for Wise in the House, like Slaven, and for the late Sen. Robert Byrd, D-W.Va., as his legislative director. Mellow also worked for the Obama administration in the Transportation Department.

Political activist Angela Davis, a former member of the Black Panthers and the Communist Party, delivered the keynote address at NSBA’s annual conference in Philadelphia in 2019.

“Through her activism and scholarship over many decades, Angela Davis has been deeply involved in movements for social justice around the world,” the guide for the conference reads, later adding: “She draws upon her own experiences in the early ’70s as a person who spent 18 months in jail and on trial, after being placed on the FBI’s ‘Ten Most Wanted List.’”

The National School Boards Association hasn’t crossed the radar for many Americans until now, said Michael Watson, research director for Capital Research Center, a nonprofit watchdog group, who recently wrote about the association’s links to the dominant national teachers union and liberal leanings.

“In Washington, everyone and their mother has a trade association. This one decided to dive head first into the kiddy pool of the culture war,” Watson told The Daily Signal in an interview Monday.

The funding from the National Education Association indicates the two organizations are on the same page, he said.

“They are sympatico on public education and the power of unions,” Watson said. “Teacher unions have organized campaigns to win school boards.”

In their Sept. 29 letter to Biden, the National School Boards Association’s Garcia and Slaven called for the administration to “investigate, intercept, and prevent the current threats and acts of violence against public school officials through existing statutes, executive authority, interagency and intergovernmental task forces.”

The association’s letter states that threats of violence “could be the equivalent to a form of domestic terrorism and hate crimes.” It asks for a review to:

examine appropriate enforceable actions against these crimes and acts of violence under the Gun-Free School Zones Act, the Patriot Act in regards to domestic terrorism, the Matthew Shepard and James Byrd Jr. Hate Crimes Prevention Act, the Violent Interference With Federally Protected Rights statute, the Conspiracy Against Rights statute, an executive order to enforce all applicable federal laws for the protection of students and public school district personnel, and any related measure.

Days later, on Oct. 4, Attorney General Merrick Garland sparked widespread outcry by announcing that the FBI would work with local law enforcement and school officials to prevent and respond to threats against school board members and others.

In the days that followed Garland’s memo to the Justice Department and FBI, at least seven Republican state attorneys general announced their opposition to the move.

State school board associations also rebuked the National School Boards Association, complaining that they weren’t consulted and in some cases calling its letter to Biden inflammatory.

The Florida School Boards Association said it would not continue to pay dues to the national group because of this and other disagreements. School board associations from Virginia, Montana, Louisiana, and Mississippi also issued statements condemning the national organization’s letter to Biden.