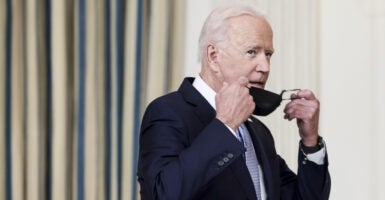 President Joe Biden takes off his mask as he prepares to deliver remarks Friday at the White House on his administration’s COVID-19 response and vaccination program. (Photo: Anna Moneymaker/Getty Images)

The Biden administration has made it clear that abiding by our federal, constitutional system of government is a mere trifle in the way of its political priorities, one to be swept aside.

The latest example finds the Department of Education now sending grants to school board members in Florida who violate the governor’s mask-mandate ban for schoolchildren.

“As part of the Biden administration’s Project SAFE grant program, an initial sum of $148,000 has been awarded to Alachua County School Board members who voted this summer to mandate masks in the county’s schools as Florida developed some of the worst rates of [COVID-19] infection in the country,” NBC News reported.

Note how this “straight news” report is carefully worded to seem objective while insinuating the administration is justified in its action.

The grant policy being used in Florida is an obvious shot at—and an end run around—the state’s Republican governor, Ron DeSantis, who signed an executive order in July that has the state withhold funds from any school district that requires masks for children.

That move in essence uses federal dollars to subvert the state’s policy.

Just a couple of months ago, the Biden administration said that Florida would be violating federal requirements by providing $1,000 bonuses to teachers and principals.

Therefore, it’s ironic that the federal government is now using taxpayer funding for education to pay the salaries of elected school board members.

It seems America’s leaders just fall further and further away from any concept of federalism and concerns over redirecting all power not only to the federal government, but to its executive branch.

Is it really a good thing that the federal government is using taxpayer money to undermine state law? It sure looks like Biden is simply seeking to punish political opponents who disagree with his policies.

This entire scenario certainly fits in with the long line of examples of why it has been such a mistake to federalize education policy in America. As schools across the country become more reliant on federal money, they begin to lose all semblance of local control.

The move to undermine Florida’s policies is also in line with the tenor of Biden’s speech announcing national vaccine mandates. Biden said he had lost “patience” with the individuals and states who have decided not to conform to his policy views and will unleash the power of his office on them.

“If they’ll not help, if these governors won’t help us beat the pandemic, I’ll use my power as president to get them out of the way,” the president warned.

That will happen whether the policy is constitutional or not. As Biden clearly indicated when he announced an extension of the COVID-19 eviction moratorium that was later struck down in court, constitutionality was not of particular concern to him.

“The bulk of the constitutional scholars say it’s not likely to pass constitutional muster,” Biden said of the eviction moratorium. “But at a minimum, by the time it gets litigated, it will probably give some additional time while we’re getting that $45 billion out to people who are in fact behind in the rent, and don’t have the money.”

Biden’s edicts come even as he’s failed to uphold the responsibilities the presidency entails, such as maintaining enforcement of the U.S. southern border and protecting Americans overseas.

As I’ve written before, this isn’t victory-over-the-Gauls-type Caesarism. It’s more the imperious but inept Caesarism of the justly forgotten emperors of late-stage Rome.