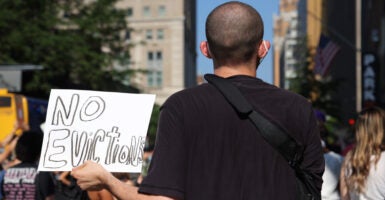 A federal judge found that the CDC had exceeded its authority with a COVID-19 moratorium on evictions, but then stayed her own decision. Pictured: A demonstrator listens to speakers at a "Resist Evictions" rally on Aug. 10 in New York City. (Photo: Michael Santiago/Getty Images)

Judge Dabney Friedrich of the U.S. District Court for the District of Columbia on May 5 struck down the nationwide ban on evictions from rental properties put in place by the Department of Health and Human Services through the Centers for Disease Control and Prevention.

Nine days later, though, after negative media coverage, she decided to leave the CDC’s order in effect.

Close examination of her two orders reveals that she got it right the first time and wrong the second, giving the appearance that she may have capitulated to media critics.

Both the U.S. Court of Appeals for the D.C. Circuit and the U.S. Supreme Court will be asked to lift Friedrich’s stay.

Judge Got It Right on Merits: Moratorium Is Unlawful

Friedrich’s order striking down the moratorium was correct as a matter of law.

The Public Health Services Act gives the CDC only the power of “inspection, fumigation, disinfection, sanitation, pest extermination, destruction,” or similar activities with respect to “animals or articles” that are “found to be so infected or contaminated as to be sources of dangerous infection to human beings.”

The CDC eviction moratorium “satisfies none of these textual limitations,” Friedrich wrote. “Plainly, imposing a moratorium on eviction is different in nature than inspecting, fumigating, disinfecting, sanitizing, exterminating, or destroying a potential source of infection.”

Additionally, “interpreting the term ‘articles’ to include evictions would stretch that term beyond its plain meaning,” she ruled. Finally, even if “articles” could be stretched so far, the statute requires that they be “found to be so infected or contaminated as to be sources of dangerous infection.” The CDC, Friedrich noted, “made no such findings here.”

That wasn’t the only problem with the CDC’s order, however. Friedrich noted that the CDC’s expansive reading of the statute would give it nearly limitless power to regulate anything that it decides is “necessary” to combat the spread of a disease.

Of course, there was no evidence that Congress ever intended to give it that much power.

Friedrich concluded her opinion by getting ahead of critics who, predictably, would complain that she didn’t deliver the political outcome they wanted, saying, “[i]t is the role of the political branches, not the courts, to assess the merits of policy measures designed to combat the spread of disease, even during a pandemic.”

In other words, she was doing her duty and acting as an umpire simply calling balls and strikes.

Had the story stopped there, we would have applauded Friedrich’s straightforward application of the law and adherence to principle.

Judge Got it Wrong on Procedure: Stay Was Wrong

On May 14, however, after a flurry of negative publicity, Friedrich’s confidence dissolved as she stayed her earlier order and let the eviction moratorium remain in effect pending appeal.

Unfortunately, she got it wrong on the law in her second order.

Here’s why: In the words of the Circuit Court of Appeals that sits over Friedrich, a stay pending appeal is “an extraordinary remedy.” To be entitled to it, the CDC would have to show “either a high probability of success and some injury, or vice versa.”

Friedrich’s first opinion leaves little doubt as to the likelihood of success on the merits of an appeal: The CDC’s case was dead on arrival.

She says as much again at the beginning of her second opinion, where she summarizes her previous ruling and concludes, “[a]rguably, the Department’s failure to meet this standard is a fatal flaw for its motion.”

If she had stopped there, she would have been correct because that failure is fatal.

But then Friedrich changed her tune. Although a majority of courts to consider this issue agreed with her that the eviction moratorium is unlawful, she noted that two have disagreed, and that, she says, gives the CDC just enough probability of success on the merits that she can now look at the probability of injury.

In other words, she retreated from her confident (and correct) legal conclusions and deferred to a minority of courts that she (again, correctly) thought got the law wrong.

But that’s not Friedrich’s only mistake. Having eked by with a small chance of succeeding in any appeal on the merits, the CDC still had to show a “high probability” of injury that is “both certain and great.” It did no such thing.

First, the alleged harms to renters and to the general public, as articulated by the CDC, are, according to Friedrich, only estimates. Plus, she acknowledges that they are offset by the rising number of vaccinations.

In short, any injury to renters and to the public that would likely result should a stay pending appeal be denied are neither “certain,” nor “great.”

Second, the law requires Friedrich to weigh the harms identified by the CDC against the harms suffered by the plaintiffs; landlords, in this case. The plaintiffs asserted losses of “close to $200 billion” over the course of the year.

Friedrich’s error here is that she weighed the speculative risk of harm faced by the entire population against the more concrete harm suffered only by the individual plaintiffs.

The harm of even a small risk of COVID-19 spread among the whole population will always seem much larger than even significant losses suffered by just a few people.

If Friedrich was going to look at the added risk of COVID-19 spread among the whole population as a result of evictions from rental properties, then the proper counterweight was the risk of harm suffered by all landlords. Her mistake guaranteed that the plaintiffs could never win.

Lastly, she declared that “the public interest” weighs in favor of a stay because of the “health reasons discussed.”  What happened to “[i]t is the role of the political branches, not the courts, to assess the merits of policy measures designed to combat the spread of disease”?

Friedrich’s retreat from her first opinion, which was a model of judicial principle and restraint, is a disappointment. The moratorium is unlawful, and her order striking it down should not be put on hold—even temporarily.