Judges Aren’t Kings. This One Didn’t Get the Memo. 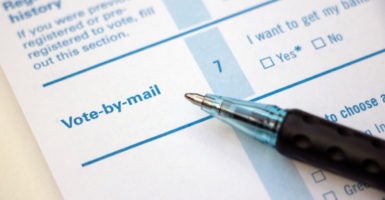 Judge Fred Biery’s order that state officials allow mail-in voting for all eligible voters in upcoming elections seems totally disconnected from the law and reads like a manifesto from a wannabe philosopher-king, complete with rhetorical flourishes, endnotes, and appendices. (Photo: Darylann Elmi/Getty Images)

In the United States, we don’t have kings or queens of any variety.

Still, some judges apparently think they are philosopher-kings, and an order released last Tuesday by a federal district court judge in Texas shows he may be in that group.

Judge Fred Biery’s order that state officials allow mail-in voting for all eligible voters in upcoming elections seems totally disconnected from the law and reads like a manifesto from a wannabe philosopher-king, complete with rhetorical flourishes, endnotes, and appendices.

There are many issues with the opinion.

Second, Biery brushed aside the concerns of state officials over potential voter fraud, stating in colorful language, “The Court finds the Grim Reaper’s scepter of pandemic disease and death is far more serious than an unsupported fear of voter fraud in this sui generis experience.” He went on to say, “Indeed, if vote by mail fraud is real, logic dictates that all voting should be in person.”

He acknowledges that between 2005 and 2018, there were 73 prosecutions in Texas for voter fraud, but he buries in the endnotes that “[a]lmost half of [these fraud] cases involved the improper use of absentee ballots, where voter fraud occurs most often.” That’s consistent with information compiled by The Heritage Foundation in its election fraud database.

Granting relief to these individuals wasn’t enough. “Though Republican voters are not parties to this case, the Court finds it would discriminate against Republicans not to afford them the same health safety precautions of voting by mail. Accordingly, the court sua sponte concludes this Order shall extend to allow Republican voters to vote by mail as well should they claim disability because of lack of immunity from or fear of contracting COVID-19.”

The judge concludes his fanciful opinion by stating: “For want of a vote, our democracy and the Republic would be lost, and government of the people, by the people and for the people shall perish from the earth.” He opines that “[c]itizens should have the option to choose voting by letter carrier versus voting with disease carriers”

Really? That’s up to the state legislature to decide, not a lone federal judge. In Texas, you already can vote by absentee ballot if there is a reason you can’t vote in person on Election Day, such as sickness or disability.

And those over 65 can vote absentee without an excuse.

It is not clear from his opinion where Biery thinks he gets the authority to decide how Texans will vote.

On top of that, his opinion makes a number of odd claims. For example, it says that those who oppose going to all-mail elections want to return us to the “not so thrilling days of yesteryear of the Divine Right of Kings.” We are going to return to a monarchy unless everyone in Texas can vote through the mail?

His statement that “[f]or those who have recently awakened from a Rip Van Winkle sleep, the entire world is mostly without immunity and fearfully disabled” ignores the fact that residents of Texas can resume many in-person activities following appropriate social distancing guidance.

Apparently, it’s safe enough for Texans to shop at Walmart in person, but not safe enough for them to vote in person. He does not even discuss the fact that Wisconsin recently successfully held its primary election with in-person voting, implementing all of the safety protocols recommended by experts

At one point, Biery claims that allowing only those over 65 to vote by absentee ballot without an excuse violates the 26th Amendment, which lowered the voting age to 18.

He ignores the 1969 case, McDonald v. Board of Election Commissioners, in which the U.S. Supreme Court said that although we have a fundamental right to vote, we don’t have a right to vote by absentee ballot through the mail. That is a privilege, not a right.

Sadly, the state’s only option at this point is to appeal to the 5th U.S. Circuit Court of Appeals and hope for a quick ruling while also continuing to litigate the issue in Texas state courts. The 5th Circuit temporarily stopped Biery’s order from taking effect while it considers the case.

This lone federal judge wrote that “‘We the People’ get just about the government and political leaders we deserve, but deserve to have a safe and unfettered vote to say what we get.” He’s right. But it raises the question: Who voted for him?

Biery’s job was to call balls and strikes. Unfortunately, that’s not what happened here.