On Its 246th Birthday, the Navy Continues to Innovate 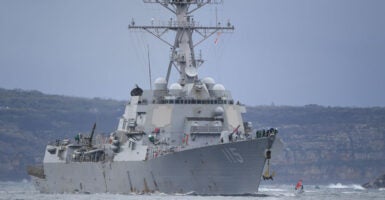 Brent Sadler is a senior fellow for Naval Warfare and Advanced Technology at The Heritage Foundation.

As the U.S. Navy celebrates its 246th birthday on Oct. 13, it is an apt time to reflect on its accomplishments of the past year. Judging by those accomplishments, innovation should be the theme of the Navy’s 245th year.

The Navy reached a milestone in September when its Ghost Fleet—the Navy’s small fleet of unmanned surface ships—launched and hit a target with an SM-6 interceptor missile. After spending years in a laboratory and controlled at-sea navigational tests, unmanned ships are now deploying.

In yet another innovative milestone, lasers that are being sent overseas on Navy destroyers are beginning to deploy with the promise of deep and safe magazines limited only by the ship’s power capacity. Two systems in particular stand out—the Optical Dazzling Interdictor and the High Energy Laser with Integrated Optical-dazzler—but these are by no means the only systems out there.

Like the turreted main guns of the dreadnaught era, if the promise of lasers comes to fruition as a defensive system, it will flip cost imposition onto the Chinese investments in ballistic and cruise anti-ship missiles. However, innovation is more than technological gadgetry. Developing new methods of employment, tactics, and techniques is just as important.

Notable in this regard was the 2021 Department of Defense’s 12-day Large-Scale Exercise that connected naval operations globally, merging the real world with virtual platforms to accelerate operational learning. This is good news, but hopefully the next Large-Scale Exercise will take place sooner rather than the Navy’s stated three-year periodicity.

This is important because urgency is needed. During a remarkable exchange before Congress this year, two Indo-Pacific commanders made clear the Chinese Communist Party’s intent. In the so-called Davidson Window named after Adm. Phil Davidson, evidence indicates China is seeking to forcefully integrate Taiwan with the mainland before 2027.

The Navy has thus far secured the peace despite prolonged Chinese provocations in the South China Sea and in the airspace around Taiwan. Vigilance at sea is paramount, and the officers and sailors have performed remarkably under the stresses of the COVID-19 pandemic and long deployments.

For example, innovative new approaches to freedom of navigation operations and combined naval drills with allies communicate to communists in Beijing that today is not the day to test the U.S. Navy.

In April, a U.S. Coast Guard cutter and Navy destroyer sailed through the Taiwan Strait in what has been a remarkable and steady drum beat of freedom of navigation operations. Since August, a total of six allied naval task forces joined the U.S. fleet in Asian waters, thereby operationalizing the Quad, an informal group consisting of the U.S., Japan, Australia, and India.

Another crowning innovative achievement was the deployment of a U.S. Marine Corps F-35 fighter squadron on the U.K.’s aircraft carrier HMS Queen Elizabeth deployed to East Asia. This August in waters near Japan, those Marines flew between the Queen Elizabeth and the U.S. amphibious assault ship USS America. This feat represented remarkable and unique illustration of the interoperability earned from decades of alliance work.

Finally, without the logistical backbone of modern shipyards, no navy could hope to compete with a competitor like China. While it may not be moving as fast as some would have liked, the Navy is finally making progress on its Shipyard Infrastructure Optimization Program, a plan to modernize its shipyards and expand its dry-dock capacities.

There is much to be done and the threats over the horizon have been downplayed for too long, but it is now clearly in view. That said, the progress the Navy made in its 245th year should give every American pride and confidence as it begins its 246th year.

Have an opinion about this article? To sound off, please email [email protected] and we’ll consider publishing your edited remarks in our regular “We Hear You” feature. Remember to include the URL or headline of the article plus your name and town and/or state