What If Political ‘Polarization’ Isn’t the Big Problem? 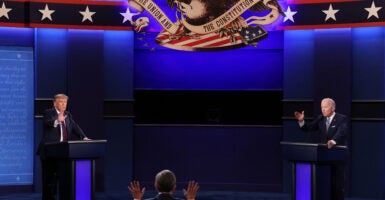 Then-President Donald Trump and his then-challenger Joe Biden take part in a presidential debate moderated by Fox News anchor Chris Wallace at Case Western Reserve University on Sept. 29, 2020, in Cleveland. Just over a year later, a new poll found that 75% of Biden voters and 78% of Trump voters think that the opposing party's supporters are a "clear and present danger to the American way of life." (Photo: Scott Olson/Getty Images)

The University of Virginia Center for Politics this week released a poll surveying Americans’ feelings about their political opponents.

Those statistics are, of course, alarming. The popular theory these days is that willingness by both Democrats and Republicans to abandon democratic norms—election-result acceptance, checks and balances, due process of law, and all the rest—is purely the result of reactionary dislike.

But is this theory correct? Is polarization actually the reason for increased willingness to ditch democratic norms?

According to a new study from political scientists David Broockman of the University of California at Berkeley, Joshua Kalla of Yale, and Sean Westwood of Dartmouth, the answer is no.

They write, “We find no evidence that an exogenous decrease in affective polarization causes a downstream decrease in opposition to democratic norms.” In other words, Americans hating each other less does nearly nothing to reduce Americans’ willingness to override democratic norms in order to achieve their goals.

If polarization isn’t driving the undermining of norms, what is? Perhaps the answer is that the reverse is actually occurring: As we’ve abandoned democratic norms, we’ve come to despise our neighbors. This makes a certain amount of logical and correlative sense.

The Founding Fathers had a particular vision of human nature, believing human beings were capable of great things, but were also rife with sin and corruption. Given the variability of human nature, epistemic humility—a recognition that human beings are often wrong—would be necessary. And that epistemic humility would translate into a desire for liberty.

High-level government, in this view, would be hamstrung from cramming down a unitary form of virtue on a pluralistic society, at least; subsidiarity, in which local communities governed themselves while the federal government maintained certain basic norms, would be the proper approach.

The federal government would be pitted against itself through checks and balances, creating obstacles that would necessitate broad agreement about the use of power to legitimize such use of power. Today, however, most Americans seem to instinctively recoil from this vision of human nature and its concomitant governmental approach.

Instead, human beings are held to be entirely malleable creatures of circumstance who can be molded by a better system into their highest selves. Grant the “right person” with the “right principles” unending power, democratically or not, and watch virtue spring forth. The government isn’t the problem, it’s the solution.

The problem with this, of course, is that we all have different ideas of the right person and the right principles. And once we have agreed that the government ought to have the ability to fix all our problems, anyone who stands in our way becomes a heretic.

By abandoning the Founders’ accurate characterization of human nature and the governmental structure embodied in the Constitution, we set ourselves up for polarization and rage.

Perhaps the first step toward fixing our newfound dislike for democratic norms is to reinculcate not love of neighbor, but understanding of human flaws, human foibles, and the limits of human understanding. Perhaps we ought to start with some epistemic humility. From that source, perhaps a renewal of democratic norms and an embrace of our neighbors might spring.