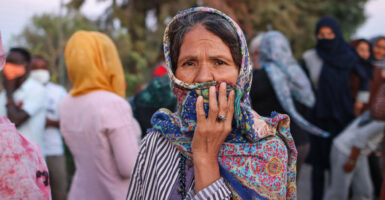 U.N. Women is trying to eradicate the differences between men and women in its language. Pictured: An asylum-seeker from Afghanistan waits for food in Greece in 2020. Most asylum-seekers stay roadside in makeshift camps built by Greece’s army using U.N. Refugee Agency tents. (Photo: Nicolas Economou/NurPhoto/Getty Images) 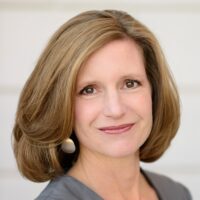 U.N. Women, the United Nations organization responsible for furthering the cause of women all over the world, seems out to erase itself and any credibility it has as a women’s rights organization.

U.N. Women announced in July 2019 it would focus on “equality of all genders” (as I wrote about here) instead of solely women’s rights. It is one of many organizations taking up the cause of nonbiological “women’s” rights to claim womanhood, much to the fear of women’s rights groups of all stripes.

Terms such as ‘male or female’ and ‘women or men’ exclude nonbinary and intersex people who don’t fall into any of these categories … Everyday language plays a huge role in breaking gender stereotypes and rejecting the binary of ‘male and female.’ Instead of using phrases like ‘ladies and gentlemen’ or ‘boys and girls,’ swap in a gender-neutral term like ‘folks,’ ‘children,’ or ‘y’all.’

But U.N. Women has yet to take its own advice. If it did, “U.N. Women” would be tossed by the wayside in favor of a less offensive name. “U.N. Folks” has a nice ring to it. Or maybe “U.N. Y’all” would be better.

The Family in Peril?

The issue is more pernicious than increasingly ridiculous semantics. The growing insistence that “womanhood,” “manhood,” and “nonbinary-hood” are up for grabs—genitals and chromosomes be damned—is a movement radical feminist Shulamith Firestone articulated and advocated for decades ago, as have her philosophical descendants.

Firestone said, “The end goal of feminist revolution must be … not just the elimination of male privilege but of the sex distinction itself.” And she meant it.

Firestone said as the nonbinary cause advances, the “genital differences between human beings would no longer matter culturally.” She means that it would not matter at all if for any reason, socially or legally, a person was male or female.

If fact, it may be illegal to distinguish between the two. Perhaps we are not quite to that point in our society—yet. But policy decisions at the local, national, and international levels have sent us careening in that direction.

Nationally, the most recent example of this is the House Armed Services Committee’s vote to require women to register for the draft in the name of “gender equality.”

Locally, wars being waged over school bathroom access are a potent example of blurring the lines between the sexes.

Internationally, countless initiatives at the U.N. and elsewhere are pushing the world toward legally and culturally eliminating sex distinctions between men and women, propelled by transgender activism and “gender equality” initiatives.

“We will not be erased!” is now a common slogan in trans activism. They claim that categorizing people into the archaic categories of “male” and “female” socially and legally erases people who consider themselves neither.

What U.N. Women and other U.N. agencies seem to be working for is the world Firestone dreamed of—a world in which biological sex is not recognized as a defining feature of one’s identity. In such a world, the terms “same sex” and “opposite sex” become meaningless.

The terms “mother” and “father” also lose meaning because those words are sex-specific and, therefore, would be considered invalid or discriminatory. The very chromosomes resting in the cells of our bodies would be considered either irrelevant or defiant enemies of our true natures.

What would be the ultimate outcome of a mass movement to obliterate recognition of physical sex? Firestone said that in such a society, “The tyranny of the biological family would be broken.”

As it is becoming ever more apparent, the goal of the sexual revolution in all its manifestations—including transgender policies that obliterate physical sex—is to break and destroy the family.

But interestingly, the U.N.’s own Universal Declaration of Human Rights says, “The family is the natural and fundamental group unit of society and is entitled to protection by society and the state.”

However, the actions, programs, and treaties of the U.N. over the last 20 years have not shown overwhelming enthusiasm for the family. In fact, one might say there has been a ferocious fight to dismember it.

But there is a bit of good news. Erasing or destroying the family will ultimately be impossible. Since the family is rooted in the inherently regenerative anatomy of people, men and women will continue to exist no matter what we do or do not call them.

Men and women will also continue to produce babies. And those babies will turn the hearts of their parents toward them as nothing else can. And the offensive and exclusionary words “mother,” “father,” “man,” and “woman” will persist and will once again be spoken with delight instead of disdain.

U.N. Women can call itself whatever it wishes, but women are here to stay.