What Needs to Happen Now That Arizona Election Audit Over 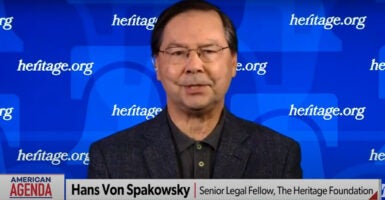 Editor’s note: Discrepancies and other problems uncovered by the Arizona Senate’s audit of the presidential election in the state’s largest county, Maricopa, were the topic of a Sept. 27 appearance by Hans von Spakovsky, senior legal fellow at The Heritage Foundation, on Newsmax’s “American Agenda.”

“Election officials in Arizona should not simply dismiss this audit [and] not take any steps,” said von Spakovsky, who manages the Election Law Reform Initiative at Heritage, parent organization of The Daily Signal. “What they need to do is take the audit report and investigate those mistakes, those discrepancies, those problems to see did they occur, and if so, they need to change their procedures to make sure it doesn’t happen again.”

Here is a lightly edited transcript of Newsmax’s interview with von Spakovsky.

Bob Sellers: Joining us now to discuss [is] senior legal fellow for The Heritage Foundation Hans von Spakovsky. Hans, I’m sure you’ve seen the releases as far as what is expected to be in this report. Tell us what got your attention, what you think we should be looking at.

Hans von Spakovsky: Well, those who are dismissing this audit now say, “Well, see, it wasn’t necessary because it’ll show that [Joe] Biden actually won the election,” are losing track of what an audit is supposed to do. It’s not actually to overturn an election. It’s to see whether there were mistakes, omissions, discrepancies in the election. And while it may confirm that in fact Biden was the proper winner, election officials in Arizona should not simply dismiss this audit, not take any steps.

What they need to do is take the audit report and investigate those mistakes, those discrepancies, those problems to see did they occur, and if so, they need to change their procedures to make sure it doesn’t happen again.

And if they find, for example, that there were individuals who were registered in more than one county and voted twice, those people need to be referred to law enforcement for investigation and possible prosecution. This audit is just the start of what needs to be done in Maricopa County.

Heather Childers: Hans, let’s break down some of the numbers, some of the ballots in question, as laid out in this report, so people can see them at home.

There were 23,344 mail-in ballots that voted from a prior address; 10,342 potential voters that voted in multiple counties; there were 9,041 more ballots returned by voters than received; 3,432 official results that do not match who voted; and there were 2,592 more duplicates than original ballots; and the margin of victory was 10,457.

So out of all of that breakdown, what do you think is most important, or telling, or significant?

Von Spakovsky: What this shows is a, frankly, great sloppiness in Maricopa County and elect officials not properly doing their job.

And again, I mean, just looking at one of the numbers of individuals who the audit says may have been registered in two different counties and voted twice, that needs to be investigated. The county needs to go in and find out, are these two different people or are they the same person? Because that’s the only way to figure out whether there were enough votes there and fraudulent votes to actually make a difference, if not in the presidential election, other elections.

Childers: How do you figure that out though, Hans? The difference between whether it was just sloppiness or does it rise to the level of fraud? Because that’s significant.

Von Spakovsky: There’s no way of knowing without looking at the issue. And an example of that is, if they investigate a particular individual who’s shown as being registered twice in two different counties, if they identify that person as being the same person, it’s hard to put that down as anything other than intentional, if they voted twice.

On the other hand, if there are discrepancies in the number of duplicate ballots that were created, and a duplicate ballot is when the original ballot has been damaged and can’t be read, that may have been simply errors made by election officials and not keeping proper track of the ballots they were having to reproduce because the original was injured.

But the only way to know any of this is to do in-depth investigations into those results that the audit is reporting to find out what happened.

Von Spakovsky: They need to take the names of all of the individuals, for example, that the audit says are registered twice in the state and voted twice and investigate each one of those individuals and find out, is it really the same person? And if so, did they vote twice? And if so, they need to be investigated and potentially prosecuted.

Childers: All right. So it sounds like whatever results we hear coming up at 4 p.m. Eastern Time won’t be the end of it. Hans von Spakovsky, thank you for joining us, as always.

Von Spakovsky: Thanks for having me.