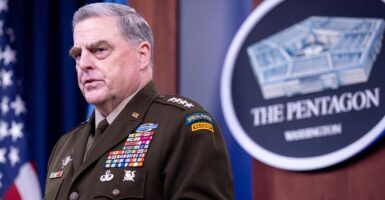 Gen. Mark Milley, chairman of the Joint Chiefs of Staff—seen here at the Pentagon on Sept. 1 holding a press briefing about the hasty U.S. military exit from Afghanistan—will have to answer more intense questions this week on Capitol Hill. He will testify along with Defense Secretary Lloyd Austin and Gen. Kenneth McKenzie Jr., the head of U.S. Central Command. (Photo: Saul Loeb/AFP/Getty Images)

Despite 20 years of U.S. operations in Afghanistan and close collaboration with the Afghan government and security forces, the Taliban recaptured the country—including the capital, Kabul—after the U.S. withdrew its forces.

That prompted a similarly hurried withdrawal by international partners.

Among the many tragic consequences that resulted were tens of thousands of civilians left behind, including thousands of Americans; 13 U.S. service members and upwards of 200 Afghan civilians killed in a terrorist suicide attack; the handover of an entire country to terrorist entities; and profound damage to America’s reputation.

While vigorous debate over the continued presence of U.S. forces had rightly taken place over the years, with compelling arguments to leave, remain, or adjust U.S. presence made by various individuals, groups, and political entities, the way the U.S. finally left Afghanistan shocked everyone.

By nearly all accounts, the withdrawal was ill-conceived from the start, rushed in its execution, and uncoordinated with international partners. It created the worst possible conditions under which to evacuate American citizens and others, fatally undermined the Afghan government and military, and facilitated the Taliban’s victory.

It is a stain on America’s honor and prestige, and its consequences will be felt for years to come.

On Sept. 28 and 29, Defense Secretary Lloyd Austin; Joint Chiefs of Staff Chairman Gen. Mark Milley; and Gen. Kenneth McKenzie Jr., commander of the U.S. Central Command, will testify before the Senate and House Armed Services committees on the Afghanistan-exit debacle.

Congress needs to take this opportunity to learn more about the many issues surrounding and contributing to such a disastrous outcome, to include: the decision-making process that led to the Taliban victory, the chaotic evacuation from Hamid Karzai International Airport, and how a much-touted “over the horizon” force can defeat emerging terrorist threats.

Among the many topics that the Armed Services committees should explore in further detail:

What was the thought process behind the decision to withdraw all U.S. forces, end close air support, and remove civilian contractors from Afghanistan, especially prior to the evacuation of U.S. citizens. When President Joe Biden entered office, the U.S. had only 2,500 troops in Afghanistan; U.S. combat operations had stopped in 2017. After that time, U.S. forces were only there to support Afghan forces with training, advising, intelligence, and airstrikes. Between 2018 and 2021, American forces suffered 39 fatalities due to enemy action, the last of those occurring in February 2020. While the small contingent of 2,500 was not enough for the Afghan government to win outright, it was enough to keep the Taliban out of power, notably with air support essential to Afghan ground operations. Now, due to decisions made by Biden, the Taliban effectively controls all of Afghanistan, dramatically more territory than they did on Sept. 11, 2001.

Question to ask: Other than the plan that was adopted and executed, were there any other plans or insights from planning efforts submitted to the White House by the Pentagon for consideration—for example, a troop extension beyond the Aug. 31 deadline or alternative sequencing that would have evacuated U.S. citizens and designated categories of Afghans prior to the withdrawal of U.S. military forces?

Given the administration’s objective of rapidly withdrawing all U.S. military forces, and presumably U.S. citizens, by an arbitrary date, it seems reasonable to expect that planning would have tried to leverage every available advantage, asset, and resource in the limited time available. The administration, even the president himself, has repeatedly said that it was ready to give the military any resources needed to accomplish the mission. If that was the case, then lack of manpower and equipment would not have been reasons for abandoning Bagram Airfield.

Question to ask: Given the requirement to evacuate tens of thousands of people in a compromised security environment, why did the U.S. abandon Bagram with its advantages in favor of Karzai Airport and its limitations?

It has been reported that the Taliban’s “catastrophic success” left them unprepared to take control of Kabul, so they were willing to cede the responsibility to the U.S., at least for a period of time. Reportedly, U.S. representatives in the discussion elected not to take advantage of the opportunity, presumably because there weren’t enough U.S. forces to control the city, even though the White House has said it was willing to give the commander whatever was needed to accomplish the mission. As a consequence, the ability of the U.S. to control anything—much less provide for the safe movement of U.S. citizens through the city to the airfield—was restricted to the interior of Karzai Airport, leaving control of everything else to the Taliban.

Question to ask: Is this true? If so, were requests made for additional forces that would have made it possible to prevent the debacle that resulted? If this is true and a request for additional personnel was not made, why not?

A lack of personnel has been cited as a primary reason for not venturing from Karzai Airport to assist in the movement of U.S. citizens and others from locations throughout Kabul to the airport. Reportedly, U.S. forces were denied authorization to leave the airport to rescue Americans stranded throughout Kabul or who were having extreme difficulty moving from the Afghan countryside to and into the airport. The same restrictions made it impossible to effect rescues and movement throughout the country. Such inabilities can only be attributed to lack of personnel, lack of equipment, and/or lack of authorization.

Question to ask: Numerous reports reveal that partner countries, such as Great Britain and France, authorized their military forces to leave Karzai Airport to rescue civilians trapped in Kabul. Why were U.S. forces prevented from doing the same, to rescue American citizens similarly trapped in Kabul or at least prevented from safe travel by Taliban checkpoints?

Biden has touted the idea that the U.S. will use over-the-horizon capabilities to strike terrorist threats in Afghanistan as they emerge, but this seems problematic. A quick glance at the map shows that there is no good way for the U.S. to access Afghanistan from the air. Pakistan is unreliable. Iran and China are not options. The Central Asian states bordering Afghanistan have shown little willingness to cooperate with the U.S. on this issue.

Another challenge to the over-the-horizon approach is the vast distances involved. Even if access to airspace were not a problem, the transit times of jets and drones, measured in hours, hinders how quickly the U.S. could respond to an emerging threat in Afghanistan.

Finally, there is the problem of not having “eyes on the objective.” Without a U.S. presence on the ground in Afghanistan, trying to determine who and where to strike will not be easy. Relying on the Taliban to provide the U.S. the intelligence should not be considered a suitable option. One need only recall the tragic situation last month when a drone strike killed civilians, including seven children, when the U.S. thought it was targeting an Islamic State-Khorasan Group car bomb attempt.

Question to ask: What are some of the practical, political, and geographical limitations regarding the over-the-horizon capabilities to defeat emerging terrorist threats in Afghanistan, and what plans are in place to mitigate some of those challenges?

In summary, the consequences of America’s withdrawal from Afghanistan, and the Taliban’s takeover of the country, remain to be seen, but it’s likely those consequences will be felt for years to come.

The broad perception by longtime allies and America’s enemies and competitors alike of U.S. ineptitude, disorganization, and betrayal of Afghan supporters, international partners, and even American citizens abandoned behind enemy lines has damaged America’s credibility, undermining diplomatic efforts in other areas and the deterrent value of American military power and political will.

It is right and proper that Congress holds the administration accountable via these hearings with its primary policy and operational representatives—Austin, Milley, and McKenzie.

Transparency and honesty are essential if future American policymakers are to learn from these mistakes in order to avoid repeating them in the future.