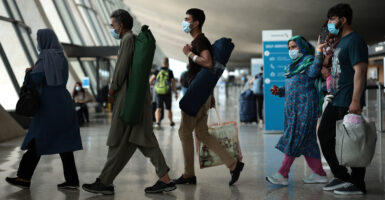 Allowing Afghan special immigrant visa holders to come to the U.S. is laudable. These are people who aided our country in its war against al-Qaeda and the Taliban. But there are also Afghan parolees entering the U.S. Pictured: Refugees walk through the departure terminal at Dulles International Airport after being evacuated from Kabul on Aug. 31 in Dulles, Virginia. (Photo: Anna Moneymaker/Getty Images)

Is President Joe Biden bringing terrorists from Afghanistan to the United States?

The answer: Even Biden himself cannot know for sure.

The Biden administration is bringing two distinct types of evacuees into the U.S. from Afghanistan. Some hold Special Immigrant Visas. Others are so-called parolees.

“Congress has enacted a series of legislative provisions since 2006 to enable certain Iraqi and Afghan nationals to become U.S. lawful permanent residents,” said the Congressional Research Service. “These provisions make certain Iraqis and Afghans who worked as translators or interpreters, or who were employed by, or on behalf of, the U.S. government in Iraq or Afghanistan, eligible for Special Immigrant Visas.”

Allowing Afghan Special Immigrant Visa holders to come to the U.S. is not only understandable; it is laudable. These are people who aided our country in its war against al-Qaeda and the Taliban.

But who is a parolee?

“The parole provision in the Immigration and Nationality Act,” the Congressional Research Service has reported, “gives the Secretary of the Department of Homeland Security discretionary authority to ‘parole into the United States temporarily under such conditions as he may prescribe only on a case-by-case basis for urgent humanitarian reasons or significant public benefit any alien applying for admission to the United States.”

“Parole does not grant, nor entitle beneficiaries to later obtain, a lawful permanent resident status,” said the Congressional Research Service.

So, the Afghan parolees who have been coming into the United States since the fall of Kabul are not entitled to lawful permanent resident status here, but whom Homeland Security Secretary Alejandro Mayorkas has decided to grant entry into our country.

Do any of these parolees belong to, or sympathize with, al-Qaeda, ISIS, or any other terrorist group?

In a hearing in the House Foreign Affairs Committee on Sept. 13, Rep. Chris Smith, R-N.J., questioned Secretary of State Antony Blinken on the vetting of Afghan evacuees brought to this country.

“Were there any gaps or weaknesses in the vetting process of Afghan evacuees, especially in light of the fact that reliable information on some, perhaps many, who got parole wasn’t available to conduct a meaningful background check?” asked Smith. “Are you concerned that the Taliban may have embedded its members as evacuees?”

Blinken did not address the fundamental question of where and how the U.S. would get reliable background information on Afghan nationals, who, unlike Special Immigrant Visa holders, had not worked for or on behalf of our government.

“With regard to the background checks, and this is very important, and you’re right to focus on it,” said Blinken, “as you know, before Afghans evacuated from Afghanistan reach the United States, they go to a transit country, and that’s where the initial checks are done.”

So, our government removed parolees from Afghanistan before it did background checks on them.

“We’ve surged Customs and Border Patrol. We’ve surged our intelligence and law enforcement capacity to do those initial checks,” Blinken continued. “And then when they get to the United States, first, at a military base, those checks are continued using all of the law enforcement, intelligence, security agencies to do that so that we can make sure that we are not letting anyone into the country who could pose a threat or risk.”

Joint Base McGuire-Dix-Lakehurst in New Jersey is one of the locations the U.S. government has been bringing Afghan evacuees.

In an interview with CNS News on Sept. 20, Smith described a visit he made to that base on Sept. 2, when he discovered that “more than 70%” of the Afghan evacuees there then were parolees—not Special Immigrant Visa holders.

“Well, they had about 3,000 Afghan evacuees there then. Now, it’s about 9,400,” said Smith. “I saw the military doing a magnificent job to make people feel at home, to make sure they had accommodations. But I was extraordinarily worried and continue to be about the vetting process before they get there.”

“I asked very serious questions about: How do you do a background check on someone, particularly somebody in the age where they might be more prone to be an al-Qaeda enthusiast,” said Smith. “How do you do a background check back in Afghanistan to determine who they are and what their affiliations might have been? From date forward, yeah, you can get fingerprints and all the rest, biometrics, but you can’t really look back all that well. So, I didn’t get good answers.”

Following up on his visit to Joint Base McGuire-Dix-Lakehurst, Smith sent a letter to Mayorkas on Sept. 13 asking some fundamental questions about the Afghans being brought there.

The most fundamental sought to discover how our government actually determines the identity of an Afghan evacuee. “Is there a biometric and historical database to vet and confirm the identity of any Afghan evacuee who has arrived at a military base, including information about one’s history before leaving Afghanistan?” Smith asked the Department of Homeland Security secretary.

“Your correspondence is very important to us,” Lugo said. “The appropriate Department of Homeland Security Components are preparing information so we can respond with the accuracy and completeness that your letter deserves. Please know that the Department’s leadership has accorded your letter a high priority, and we are endeavoring to respond to you as soon as possible.”

As of the afternoon of Sept. 21, the Department of Homeland Security had still not responded to Smith.

In the meantime, according to Smith, Afghan evacuees have been leaving Joint Base McGuire-Dix-Lakehurst and venturing into the United States.

Smith was asked by CNS News on Sept. 20: “Have some of the parolees actually left the base there?”