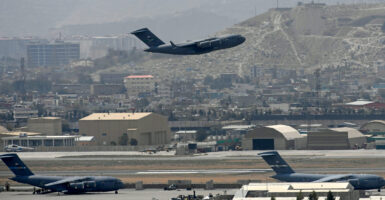 A U.S. Air Force aircraft takes off from the airport in Kabul, Afghanistan, on Aug. 30. Rockets were fired at Kabul's airport, where U.S. troops were racing to complete their withdrawal from Afghanistan and evacuate allies under the threat of Islamic State attacks. (Photo: Aamir Qureshi/ AFP/Getty Images)

Viewing the chaos, death, and destruction accompanying the U.S. withdrawal from Afghanistan, Americans have many unanswered questions.

Cable news anchors repeatedly quiz their guests with questions such as, “Should the U.S. have abandoned Bagram Airfield in early July?” Others rightly ask, “How could the U.S. have come to be dependent on the Taliban for airport security in Kabul?”

Americans want to know whether the U.S. should have blown up all the military equipment rather than have it be captured by the Taliban? What about the decision to abandon the military prison at Bagram Airfield containing thousands of the worst terrorists in Afghanistan?

To Americans accustomed to seeing their military succeed, none of what they see on TV makes sense.

In military operations, the timing of decisions is crucial: Options that are available early in a campaign become increasingly difficult or impossible to execute as time passes. Time and enemy action impose a tyranny that is difficult, if not impossible, to overcome.

Working for then-Gen. (now Defense Secretary) Lloyd Austin in Iraq in 2011 as U.S. forces executed a drawdown, we knew that if we didn’t get the White House decisions needed at certain points in time, our options dramatically narrowed.

In one case, we needed a decision on a proposed U.S. stay-behind force by mid-October, or we would be forced to abandon millions of dollars of commercial generators on the ground at Ain al-Asad Airbase in Iraq.

Similarly, the military options for Afghanistan that were available in April, when President Joe Biden first announced the 100% withdrawal of U.S. forces, narrowed every day until mid-August, when the Taliban overran Kabul and disaster arrived.

Even though by late June, a number of  indications began to emerge that the Taliban was on the march, no apparent changes were made to plans.

Should the U.S. have held onto Bagram Airfield, the most capable and easily defensible base in the country, until all U.S. forces were out of country? Intuitively, the answer is yes.

Even on July 2, when the U.S. abandoned Bagram in the middle of the night, there were already signs that the Taliban was making unexpected progress in its campaign to take over Afghanistan and that things were going to get messy.

Bagram provided more ability to stage aircraft and was connected to Kabul by two of the best roads in the country.

Clearly, assumptions about the Afghan army’s ability to hold should have been called into question by then, and the withdrawal plan revisited. But to hold Bagram would have required additional forces and a delay in the U.S. withdrawal date. Biden’s arbitrary withdrawal deadlines would have had to go out the window, and that was clearly not something the White House was willing to consider.

Should the U.S. have had to be dependent on the Taliban to secure the outer perimeter of Hamid Karzai International Airport once Kabul fell? Of course not.

It’s inconceivable any U.S. military leader would willingly outsource security to a known terrorist outfit. But, in the face of unyielding White House direction to be out of the country by Aug. 31 and the resulting pressure that was placed on the number of U.S. troops that could be deployed in Afghanistan, we might find the Pentagon made the best of an impossible situation.

To make sense of what seems to be these baffling decisions, Americans also will need to fully understand the White House authority and guidance the military was operating under regarding timing, operations, and forces.

On the day of the attack that tragically killed 13 service members, Biden declared, “Every day when I talk to our commanders, I ask them what they need. What more do they need, if anything, to get the job done. As they will tell you, I granted every request.” That is as it should be in extremis.

But the question persists: Was this willingness by the president to “grant every request” always present? Or were earlier advice or requests treated differently? In other words, if there were earlier Pentagon requests to add more forces or modify the withdrawal plan to reduce risk to Americans and increase the odds Afghanistan could hold, was Biden just as amenable then—as he appears now—to consider changes?

Did the Pentagon have the latitude to make changes, even if that meant that the symbology of the Sept. 11 or the subsequent Aug. 31 withdrawal deadlines would be missed?

Finally, it also will be interesting to get to the bottom of the early advice military leaders provided Biden on withdrawal.

In an interview on Aug. 23 with ABC’s George Stephanopoulos, Biden was asked whether his military advisers had recommended keeping 2,500 troops in Afghanistan. Biden responded: “No. No one said that to me, that I can recall.” But The New York Times has repeatedly reported that Biden’s top military advisers consistently recommended keeping a small U.S. presence in Afghanistan to conduct counterterrorism operations and bolster the Afghan army. These conflicting statements need to be reconciled.

What has unfolded over the past weeks has been a tragedy on many levels, from the families who lost loved ones to the descent of Afghanistan into the hands of the barbaric Taliban and other terrorists to the incalculable damage done to U.S. credibility.

Legitimate questions have been raised. Americans deserve a full accounting, accompanied by a full understanding of the timing of the decisions and the authorities that had been granted to the U.S. military.

Only then—perhaps—will any of this come close to making sense.