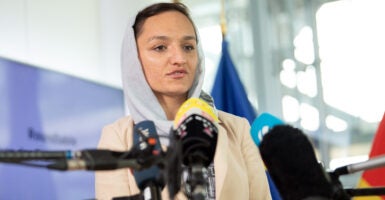 Zarifa Ghafari, the female former mayor of Maidan Shahr, a small city in central Afghanistan, on Aug. 26 in Dusseldorf, North Rhine-Westphalia, Germany, tells the media about the refugee exodus from Afghanistan and the current dire situation of Afghan women presented by the Taliban's takeover. (Photo: Federico Gambarini/DPA/Picture Alliance/Getty Images)

Taliban spokesman Zabiullah Mujahid recently warned women to stay inside their homes, saying, “We are worried our forces who are new and have not been yet trained very well may mistreat women.” Some Afghan women fear that the supposedly temporary measure of keeping women indoors will remain in place.

This comes after Mujahid promised last week that women “will be given all their rights within Shariah, the Islamic laws.” However, it’s wrong to put qualifiers on human rights. If Afghan women’s equality is based on the Taliban’s interpretation of Shariah law, then they are not truly equal at all. The women who remember life under the Taliban’s control of Afghanistan from 1996 to 2001 know this better than anyone.

Previously under Taliban rule, women could not work outside the home in most instances, leave the house without a male guardian, or receive a proper education. This is a reality that Afghan women don’t want to revert to.

After the Taliban was defeated in 2001, Afghan women began a long struggle for basic freedoms and opportunities. Trailblazing women entered and succeeded in many sectors of Afghan society. They went to college, started businesses, and thrived when given the opportunity.

But the effects of Taliban rule were long-lasting, and the journey for women’s rights in Afghanistan over the past 20 years was difficult and still a work in progress in the male-dominated culture. Now, women fear a return to the way they were forced to live in the 1990s.

Many young women, especially those living in urban areas and who were too young to remember the previous Taliban rule, grew up with the expectation of receiving an education and having the opportunity for a career. When Afghanistan quickly fell to the Taliban, these women’s dreams were crushed.

Some who used to work outside the home now fear they will be punished for it. Author Gayle Tzemach Lemmon reported that a young woman who visited a makeshift camp in Kabul filled with families who fled Taliban fighters in northern Afghanistan said, “Girls who had duty out of house [are] in greater risk, because [the Taliban] recognized them, and then they punish, they ask, ‘You are Muslim. Why are you working out of you[r] home?’”

Niloofar Rahmani, the first female Afghan air force pilot, worries that the Taliban might harm women who served in the Afghan air force as retribution. She has been a Taliban target herself. “They wanted to kill me just for what I have done, so I know what [Afghan women] are going through.”

Afghan women might lose the opportunity to have a career and even have a basic education.

Clarissa Ward, CNN’s chief international correspondent, spoke with a room full of Afghan women on Aug. 10. She said, “The Taliban talks about how it’s changed now, and girls can go to school, but I asked if any of these girls will be going to school, and I was told, ‘Absolutely not. Girls don’t go to school.’ When pressed about why they would not be going to school, the women replied that the ‘Taliban says it’s bad.’”

Worst of all, some Afghans who fled into Kabul from Taliban-held areas prior to the group’s takeover of the city claimed that Taliban fighters were demanding that communities surrender their unmarried women to become wives for fighters, essentially treating these women as sex slaves. This is a terrifying possibility for any family.

It remains to be seen what life will look like exactly for Afghan women and girls under the Taliban in the coming months. Yet, many are scared and are facing an unimaginable future. Careers will be destroyed, young women’s safety is at risk, and hope for young girls’ futures is diminishing.

U.S. leaders and intelligence officials knew how bad the Taliban would be, especially for women. When President Joe Biden withdrew from Afghanistan, knowing what the consequences would be, was he also giving up on women’s rights in Afghanistan? Afghan women have just been sent back in time 20 years, and they have a long road ahead of them to reclaim their basic freedoms once again.

Every single woman in Afghanistan is created in the image of God, possesses inherent human dignity, and deserves to be treated with respect and honor. Pray that they will be.

This column first appeared at FRCblog.com.