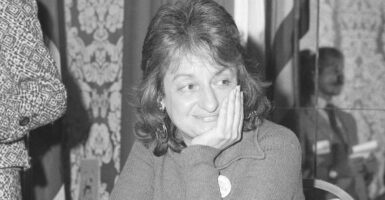 Colonial American women volunteered, tended to those who fell on hard times, acknowledged natural differences between the sexes, and saw distinctions among children, spouses, and siblings. Pictured: Betty Friedan, an American feminist writer and activist who co-founded the National Organization for Women in 1966, argued that women could only achieve satisfaction through high-powered careers. (Photo: Bettmann/Getty Images) 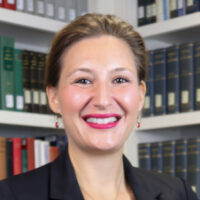 Feminism has never gotten American women quite right. It has done its best, going through various evolutions and grasping at ideas from abroad. Yet French and Marxist feminists have never captured the American character.

The female American mind is animated by both spirited femininity and Americanism. Feminism at various times has misunderstood or rejected one or both of these components.

Early feminists in America fought for consent of the governed, property rights, and equality before the law. Very American indeed. Yet they sometimes missed their target when it came to equality.

They resolved that women must secure “an equal participation with men in the various trades, professions, and commerce.” In this context, equality means “sameness,” and the objective is to achieve proportionate outcomes.

American equality, however, is about natural rights. All human beings have equal ownership of their abilities and the subsequent right to exercise them freely.

As everyone has varying talents and interests, disproportionate results will arise from the fair competition of genuine difference. Respecting equality means accepting variances in outcome.

Second-wave feminism helped promote a shift in American attitudes regarding work and the family. In “The Feminine Mystique,” Betty Friedan argued that women could only achieve satisfaction through high-powered careers.

You can see the appeal. Americans are ambitious explorers. If there were new frontiers to master, American women were prepared to match their pioneering feminine forebears.

Yet while Americans value high achievement, we pursue achievement with a purpose. American ambition is not simply careerism solely focused on the individual. We want life to be better for our children.

For their sake, women will pull shifts at a hospital or run a household, knowing there is a quiet dignity in providing for their families (though such work is often not exactly glamorous).

American women do not want to impose limitations on personal accomplishment; our rebellious nature abhors constraints. But we appreciate the reciprocal courtesy of recognizing the invaluable sacrifices of motherhood, itself a noble ambition.

Feminism’s final iteration has gone even further, rejecting both femininity and Americanism. Relying on Marxist and French philosophies, feminists today argue that masculinity and femininity are merely cultural constructions, with no grounding in nature.

For men and women to be equal (again, the same), physical differences must be managed with science. Technology will even overtake childbearing.

First and foremost, modern feminism rejects the American founding in favor of identity politics. For identitarians, America is not a single people united by a common character but an amalgamation of oppressed and oppressor groups.

The feminine compassionate impulse should be channeled toward tribal divisiveness rather than loyalty to one’s country and family (including fathers, brothers, and sons). And all women should be afforded the moral high ground to make up for a patriarchal past—itself an incomplete and unhealthy view of history.

It is of no consequence if American principles, such as equality before the law, are sacrificed.

Not understanding America herself, it is no surprise that feminists do not appreciate American women. American femininity is not of the restful variety. We have never been demurring and delicate coquettes protective of our leisure.

Instead, we seize challenges with capable and caring hands for family and country, believing ourselves not simply private women but citizens.

Life for Colonial American women, for example, was alive with activity. They spent much of their time volunteering and tending to others who had fallen on hard times as a result of fickle fortune.

Their contribution was public-spirited, as many philanthropic programs fostered skills and habits that taught people to govern themselves.

American women grant little care or weight to the claim that there are no natural differences between men and women—an idea so lacking in common sense that it only attracts intellectuals.

They see distinctions in their children, spouses, and siblings. But rather than giving differences undue significance by trying to eliminate them, Americans put them to use.

We apply the principle of the division of labor to the family. Americans are entrepreneurs, after all. Living in the heartland requires a great deal of physical work, and husbands and fathers often shoulder what’s most demanding.

While American women are not fussy and are ready to contribute as much as our bodies allow, we are also confident in our own unique strengths and don’t need to replicate men’s.

Feminism does not speak to the female American mind. With the battles for important natural and civil rights won, the future of women in America is not feminism but Americanism.

Our commonality lies not in divisive foreign ideas but in the principles of our own founding. We are the posterity of Harriet Tubman, fearlessly guiding her fellow Americans to freedom. Or Dolley Madison, meeting the fire to protect a portrait of our heritage.

We trace the wily and wise words of Harriet Beecher Stowe and Abigail Adams, deftly directing the conscience of a country. These are the women of America. We are not feminists. We are pioneers.

This piece was originally published at RealClear’s American Civics portal.