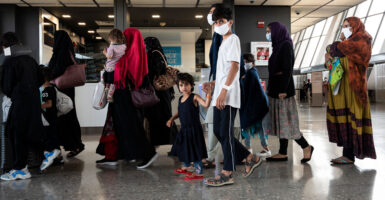 Refugees from Afghanistan are escorted to a waiting bus after arriving and being processed at Washington Dulles International Airport in Northern Virginia on Aug. 23. (Photo: Andrew Caballero-Reynolds/AFP/Getty Images)

In remarks Friday at the White House, President Joe Biden again proved he is out of touch with reality. Responding to criticism that America’s credibility has been damaged due to his precipitous withdrawal of U.S. troops, Biden said, “I have seen no question of our credibility from our allies around the world.”

Several allies have been critical, among them German Chancellor Angela Merkel, who met with Biden at the White House last month. She called the withdrawal “an extremely bitter development.” We were not in this alone, after all. It is right for our allies who fought valiantly with us to feel betrayed.

Perhaps the most powerful and emotional criticism came from Tom Tugendhat, a member of the British House of Commons. Tugendhat, who served in Afghanistan, called Biden “shameful” for disparaging the Afghan military. He said he had lost friends there and accused Biden of having “torn open” old wounds with a withdrawal that appeared to be a “defeat.”

Biden has also claimed to have been uninformed by his own intelligence agencies that disaster awaited a rapid pullout. That’s not what intelligence sources are saying in leaks to the media. This bogus claim further erodes his credibility.

Secretary of Defense Lloyd Austin contradicted the president when he said Taliban fighters have been harassing and beating Americans trying to flee Afghanistan. Biden said he had “no indication” Americans are being prevented from reaching the Kabul airport. Reaching the airport and getting on a plane are not the same, as the Taliban has it encircled with checkpoints.

Does anyone know what’s going on in this administration? Aside from its claims not to know how many Americans remain in Afghanistan and its inability to ensure their safe passage out of the country—which could lead to the taking of hostages as in Iran in 1979—the long-term consequences of our poorly executed non-policy will continue, perhaps for years to come.

In 2021, the 14-century-old vision and strategic goal of Islamic terrorism is not limited to the territory of Afghanistan. It is driven by fanatic imperialism, striving to subordinate the ‘infidel’ West—and especially ‘the Great U.S. Satan’—which is perceived to be the key obstacle on the way to Islamic global domination.

Islamic terrorism is determined to establish a global Islamic society, ruled by the Quran and Sharia (‘divine law’), which is inconsistent with peaceful coexistence with the ‘infidel’ U.S., irrespective of its involvement in Afghanistan.

In fact, it requires a decisive war against the U.S., including terrorism on the U.S. mainland.

Western targets are not the sole focus of these terrorists. They have made clear their intent to topple countries headed by Muslim leaders whom they regard as heretics. Those include Jordan and Saudi Arabia, the latter a primary interest of the late Osama bin Laden.

In coming after the West, terrorists don’t have to initially “take over” a country. They only have to sow fear and chaos, wreck economies, and erode freedoms. As we’ve seen after 20 years in Afghanistan, they are patient, and we are not.

Through immigration, a higher birth rate, and achieving positions in Western governments, they intend to methodically rule the world. They count on the West’s weakness and exhaustion to help propel them to victory.

After only seven months in office, Biden has shown himself to be a weak and failed president. What our enemies make of it will have serious repercussions far beyond however long his administration lasts.