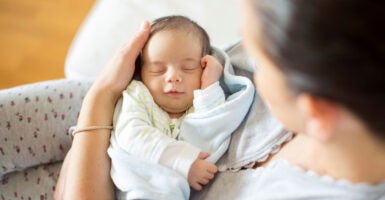 The Arkansas law blocked by a judge, which doesn't make exceptions for rape or incest, is considered one of the strictest pro-life measures in the country. (Photo: Thanasis Zovoilis/Getty Images)

A federal judge has blocked a law that would have banned almost all abortions in Arkansas, calling it an “imminent threat” to women seeking abortions.

Gov. Asa Hutchinson, a Republican, signed the bill into law in March. It would ban all abortions except in cases when the procedure would save the life of the mother. The law, which did not make exceptions for rape or incest, is considered one of the strictest pro-life measures in the country.

“I signed SB6 because of my sincere and long-held pro-life convictions,” Hutchinson said in a statement Wednesday to The Daily Caller News Foundation. “The court struck down the law because it is in conflict with Roe v. Wade.”

Roe v. Wade is the Supreme Court decision that essentially legalized abortion on demand across the nation.

“This legislation had the dual purpose of protecting Arkansas’ unborn and challenging long-standing Supreme Court precedent regarding abortion,” the governor added. “I hope the Supreme Court will ultimately accept this case for review.”

Republican state lawmakers also had written in the text of the legislation that “it is time” for the Supreme Court “to redress and correct the grave injustice and the crime against humanity which is being perpetuated.”

The wording positioned it as a challenge to Roe v. Wade.